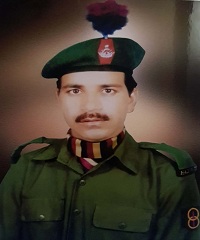 Lance Naik Bhagwan Singh  was born on 03rd May 1970 and hailed from Papurna village in Khetri tehsil of Jhunjhunu district in Rajasthan. Son of Shri Bhanwar Singh Nirwan and Smt Sajna Devi, Lance Naik Bhagwan Singh  joined the Army on 17 Dec 1987 at the age of 17 years. He was recruited  into 27 Rajput of the Rajput Regiment, an infantry regiment well known for its brave soldiers and numerous battle honours.

After serving for few years, L/Nk Bhagwan Singh got married to Ms Vijesh Devi and the couple had two sons Kamaldeep Singh & Bhupendra Singh and a daughter Supriya.  Lance Naik Bhagwan Singh served in Bhutan and had two tenures in the trouble-torn  J&K areas as part of Op Rakshak before being posted to Siachen area. During his service career,  L/Nk Bhagwan Singh received Sainya Seva Medal, nine years long service medal and the gallantry award Sena Medal. During the Kargil war, L/Nk Bhagwan Singh was once again serving in J&K and took part in operations as part of operation Vijay.