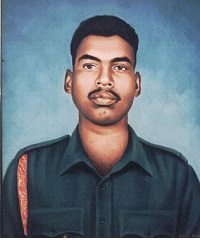 Arm/Regt: The Brigade of the Guards

Lance Naik Albert Ekka, was born on 27 December 1942 in Zari Village in Gumla district of  Bihar (now Jharkhand). Son of Sri Julius Ekka and Smt Mariam Ekka, he was adventurous by nature and always nursed the idea of joining the Indian Army. His dream turned into reality when he joined the army on 27th Dec 1962 at the age of 2o years. He was recruited into 14th Battalion of Brigade of the Guards, a mechanized infantry regiment known for its fearless soldiers and various battle exploits.  He was a keen sportsman and excelled in various games, especially hockey.

By 1971, Lance Naik Albert Ekka had put in about 9 years of service and had served in numerous counter insurgency operations in the North East region. When the 1971 Indo-Pak war broke out, Lance Naik Albert Ekka’s unit got involved in the battle of Gangasagar, which was very crucial in paving the way for the advance of Indian Armed Forces towards their target in Bangladesh.

During the Indo-Pak War in 1971, the 14 Guards was dispatched to capture a Pakistani position at Gangasagar about 6 Kms west of Agartala in Brahmanbarhia district of what was then East Pakistan. It was located on a major railway link to Dhaka and owing to its strategic position was well-fortified position and was heavily mined too. But this position was critical to the Indian Army for the capture of Akhaura on the way to Dhaka.

So 14 Guards launched an attack on enemy positions at on the night of 03 December 1971. Lance Naik Albert Ekka went with the left forward company of the battalion in the attack. The Indian troops were subjected to intense shelling and small arms fire by the enemy. Lance Naik Ekka spotted an enemy light machine gun firing from a bunker causing heavy casualties. Unmindful of personal safety, he charged at the bunker, bayoneted two soldiers and captured the bunker post. He was seriously injured in the exchange, but that did not stop him. Epitomizing the motto of his regiment, the Brigade of the Guards, “Pahla Hamesha Pahla” meaning ,”First Always First”, he continued his advance with his company, securing bunker after bunker.

Soon, they reached the northern end of their objective. An enemy medium machine gun opened fire on them, inflicting heavy casualties and once again, Lance Naik Ekka rose to the occasion and threw a grenade into the bunker and bayoneted the remaining enemies, and silenced the weapon. Although grievously injured in these close encounters Lance Naik Albert Ekka continued to pursue the objectives of his company relentlessly. His daring action helped his company in successfully driving the enemy away from Gangasagar. The fall of Gangasagar forced the enemy to vacate Akhaura and consequently the Indian troops soon were on their victorious march towards Dhaka.

Lance Naik Albert Ekka was in the left forward company of a battalion of the Brigade of Guards during their attack on the enemy defences at Gangasagar on the Eastern front. This was a well-fortified position held in strength by the enemy. The assaulting troops were subjected to intense shelling and heavy small-arms fire, but they charged onto the objective and were locked in bitter hand-to-hand combat. Lance Naik Albert Ekka noticed an enemy light machine-gun (LMG) inflicting heavy casualties on his company. With complete disregard for his personal safety, he charged the enemy bunker, bayoneted two enemy soldiers and silenced the LMG. Though seriously wounded in this encounter, he continued to fight alongside his comrades through the mile-deep objective, clearing bunker after bunker with undaunted courage. Towards the northern end of the objective one enemy medium machine-gun (MMG) opened up from the second storey of a well-fortified building inflicting heavy casualties and holding up the attack. Once again this gallant soldier, without a thought for his personal safety, despite his serious injury and the heavy volume of enemy fire, crawled forward till he reached the building and lobbed a grenade into the bunker killing one enemy soldier and injuring the other. The MMG, however, continued to fire. With outstanding courage and determination, Lance Naik Albert Ekka scaled a side wall and entering the bunker, bayoneted the enemy soldier who was still firing and thus silenced the machine-gun, saving further casualties to his company and ensuring the success of the attack. In this process however, he received serious injuries and succumbed to them after the capture of the objective. In this action, Lance Naik Albert Ekka displayed the most conspicuous valour and determination and made the supreme sacrifice in the best traditions of the Indian Army.

His widow, Balamdina, visited the burial site of Lance Naik Albert Ekka ,44 years after his martyrdom in Sripalli village in Dukli, 15 Kms from Agartala. After collecting his soil she had said “I have collected the holy soil from my husband’s graveyard and want to build a memorial in my Jari village so that people remember the sacrifice of Albert Ekka forever. I am very happy and all my doubts over the death are over,”.