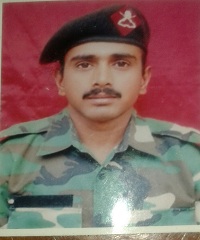 Lance Naik A U Biddappa

Lance Naik A U Biddappa was born on 01st June 1972 and hailed from Kargunda village in Kodagu district in Karnataka, Son of Shri Uthappa and Smt Shanthi, Lance Naik Biddappa completed his schooling at Bettageri Village. After completing his school education he  joined the Army at the age of 21 years on 1st March 1993. He was recruited into 11 Madras of the Madras Regiment, an Infantry Regiment with a rich history of gallantry and battle honours. He completed his training at Madras Regimental Center at Wellington in Tamil Nadu and got posted to J & K as his first assignment.

Lance Naik Biddappa served in J & K for two years from 06th Feb 1994 to 16th August 1996 and then got posted to another insurgency prone area of Manipur. In 2001, he got married to Leena and the couple had a daughter Tanisha. Later he was part of Op Parakram and then got posted to Siachen area as part of Op Parakram, which turned out to be his last posting.

During 2003, Lance Naik Biddappa was serving with his unit that was deployed at Siachen area. The unit was deployed in Saltoro ridge in Siachen glacier in Ladakh region of Jammu & Kashmir. Siachen is the second longest glacier in the world and is known as the world’s highest battleground, situated at an altitude of 5,700 meters. The extreme low temperatures – which can drop to minus 60 degrees Celsius during winter – has claimed hundreds of lives since 1984, when India and Pakistan stationed their troops on the Glacier. The soldiers at the Saltoro ridge located about 20 Kms north west of Siachen have to fight not only the treacherous enemy but the extreme hostile weather too on a daily basis.

Lance Naik A U Biddappa is survived by his wife Leena and daughter Tanisha who was born one month after her father’s martyrdom.