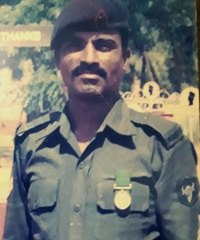 Lance Havaldar  Shankarappa was  born on 1st June 1961, in Hanchinal village of Bagalkot district in Karnataka. He belonged to a farming family and had six other siblings. Since his childhood L/Hav Koti was very responsible and hardworking and would often help his parents in the farming field. When L/Hav Shankarappa was 20 years old, he joined the army in the year of 1981. Later L/Hav Shankarappa Koti got married to Uma and the couple had a daughter named Trupti.

During his service, L/Hav Koti participated in various field operations and served in places with challenging terrain and work environments. The family also travelled with him and stayed at Ranchi  (Bihar), Sri Ganganagar (Rajasthan),  Udhampur (Jammu & Kashmir) and Secunderabad ( Andhra Pradesh). In 1996,  L/Hav Koti got posted to 7 Engg Regt deployed in Solmara, Assam and was engaged in anti-insurgency operations. L/Hav Koti was an outstanding soldier for which he was awarded with several medals – 9 years long service medal, special service medal with clasp suraksha ‘OP RHINO’, 50th anniversary independence medal, Sainya Seva medal with clasp ‘BENGAL & ASSAM’. L/Hav Koti was a part of various important  operations and some of them are listed below:

On Friday 10th September 1999, L/Hav Koti’s unit was tasked to engage terrorists in Solmara village of Tezpur district, in Assam on receiving specific intelligence inputs about their presence in that area. L/Hav Koti along with his troops launched operation against terrorists and soon a gun-battle ensued. The terrorists were heavily armed and were firing from positions of advantage. L/Hav Koti and his comrades fought valiantly against the terrorists and the operation continued for several hours.

However during the fierce gun battle , L/Hav Koti came under direct fire and received 13 bullets on his chest injuring him severely in the process. Though he was  badly injured, he continued to fight along with his comrades till he collapsed. L/Hav Koti later succumbed to his injuries and was martyred. During the operation , he showed extreme bravery, compassion for his fellow soldiers and made supreme sacrifice in the best traditions of the Indian Army.

L/Hav Shankarappa Koti is survived by his Wife Uma and daughter Trupti.