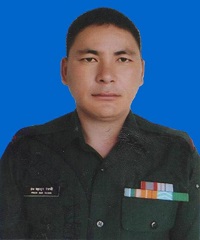 Lance Havaldar Prem Bahadur Resmi Magar hailed from Sauni village in Falpa, Nepal. After completing his initial education he joined 1 Gorkha Rifles regiment of Indian army  in the year 1997. By 2016, Lance Hav Prem Bahadur  had put in about 18 years of service in the army, and had served in some of the most dangerous and risky areas. Later while serving in J & K, he became part of the unit’s Ghatak (commando) team, which inducts tough and battle hardened soldiers, capable of undertaking very challenging tasks. During his tenure, the Ghatak team was involved in two operations in the Tangdhar area of Jammu and Kashmir in which seven militants were killed.

During 2016, Lance Hav Prem Bahadur’s unit was deployed in Kupwara district of J & K for counter insurgency operations. The Tangdhar sector of Kupwara was very volatile and was often used by the militants to infiltrate into Indian territory. The troops had to keep a very strict vigil and would face challenging situations on a regular basis. On 16th June 2016 a group of Pakistan based terrorists were trying to sneak in the Tangdhar area and the infiltration bid was detected by the troops of 1/3 GR battalion who were on patrol. Lance Hav Prem Bahadur was part of the patrol team that spotted the suspicious movement and swung into action.  The infiltrators fired at the troops on being challenged and a fierce gun battle ensued thereafter.

Lance Hav Prem Bahadur displaying exceptional courage and field craft skills engaged the militants and eliminated four of them. However during the heavy exchange of fire, Lance Hav Prem Bahadur got severely injured by a series of bullet hits. He later succumbed to his injuries and was martyred. Lance Hav Prem Bahadur believed and lived by the motto ‘Kayar Hono Banda Marno Ramro (Better to die than to live the life of a coward)’ till he breathed his last while fighting the terrorists . Lance Hav Prem Bahadur was given the nation’s second highest peace time gallantry award, “Kirti Chakra” for his gallantry, indomitable spirit and supreme sacrifice.

The then  Corps Commander Lt Gen Satish Dua while paying glowing tributes to Lance Hav Prem Bahadur said, “The nation shall remain indebted to him and present generation will continue to draw inspiration from him.”

“Lance Hav Prem made the supreme sacrifice while fighting infiltrators in Tangdhar in an operation that eliminated four terrorists. He has been  given a befitting tribute by his comrades in arms at BB Cantt in Srinagar,” said Indian Army spokesman.