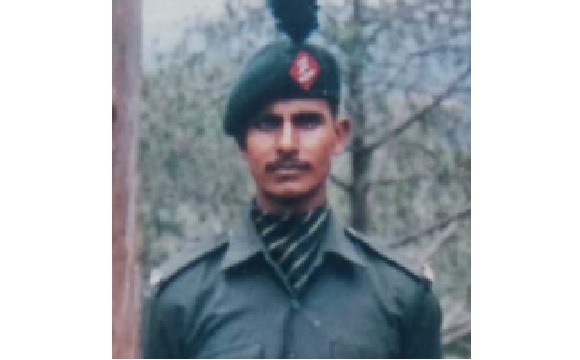 Lance Naik Ram Dular Yadav hailed from Padenia village of Mohhamadabad tehsil of Ghazipur district in Uttar Pradesh and was born on 1st July 1974. Son of Shri Ram Nagina Yadav and Smt Surji Devi, he joined the army after completing his school education in the year 1990 at the age of 16 years. He was recruited into 13 Kumaon battalion of the Kumaon Regiment, one of the most decorated regiments of the Indian Army. The regiment traces its origins to the 18th century and has fought in every major campaign of the British Indian Army and the Indian Army, including the two world wars. The word Kumaon is derived from the word “Kurmanchal” meaning Land of the “Kurm” avatar (the tortoise incarnation of Lord Vishnu, preserver of the Hindu Trinity). By the year 1999, he had served for nearly nine years and had been promoted to the rank of Lance Naik.

Though the Kargil war had ended officially on 26 July 1999, the situation along the LOC continued to remain tense during Aug 1999 too. During that period L Nk Ram Dular's unit 13 Kumaon was deployed in Sub Sector West (known as Sub Sector Haneef). Besides facing unprovoked firing from across the border, the AOR(Area of Operations) of the unit also fell into the region affected with active militancy which demanded high alert at all times on the part of the troops. In addition to manning various posts, the area was monitored and guarded by the security forces by employing armed patrols on a continuous basis. On 31 August 1999, Pakistani forces indulged in ceasefire violation and resorted to unprovoked firing.

The enemy firing was probably an attempt to provide cover fire to infiltrators sneaking from across the border. On that day, L Nk Ram Dular and his comrades were manning the forward posts in the sector. The Indian army troops initiated a befitting reply resulting in a prolonged cross-border exchange of fire. However, during the exchange of fire, L Nk Ram Dular got hit by an enemy bomb splinters and was seriously injured. He later succumbed to his injuries and was martyred. L Nk Ram Dular was a valiant soldier who laid down his life at the age of 25 years in the line of his duty following the highest traditions of the Indian army. L Nk Ram Dular was given the gallantry award, “Sena Medal” on 26 Jan 2000 for his commendable courage, devotion to duty and supreme sacrifice.