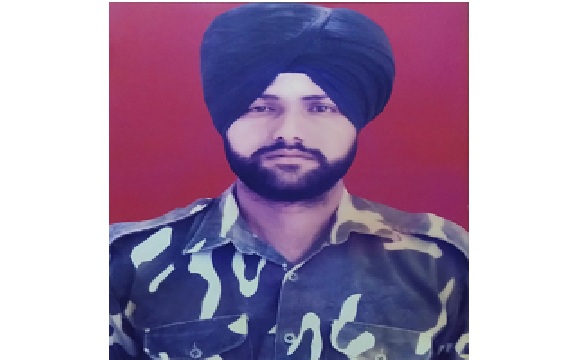 Lance Naik Paramjit Singh hailed from Surkhpur village located in Kapurthala district of Punjab and was born on 12 March 1974. Son of Shri S.Mohinder Singh and Smt Salinder Kaur, he completed his initial school education from his village government school and then class XII from government senior secondary school Dhilwan. His father too had served in Indian Army during 1962 Indo-China War and then joined Punjab Police in 1971 and subsequently retired in 1991 as ASI from the Intelligence Bureau of Punjab Police. L\Nk Paramjit Singh too wanted to serve in the Armed Forces like his father since his younger days. Consequently he joined the army on 26 April 1991 at the age of 17 years.

He was recruited into 235 Engg Regt of Bengal Engineer Group (BEG) of the Corps of Engineers, one of the oldest arms of the Indian Army. After completing his training, he got posted to 235 Engineer Regiment and got involved into various operations. Within a short span of time, he learnt the required field craft skills and earned the praise of his peers and seniors as well. He was soon selected for United Nations Organization Peace Keeping Force (UNOPKF) at Somalia (Africa) as part of the Indian contingent of the UN Mission. He served in the UN Mission from 15 July 1993 to 16 December 1994 and proved his mettle there too. For his exceptional work during this period, he was awarded the UNOSOM-II medal.

In the 1999 his unit was deployed in Jammu and Kashmir from 20 January 1999 to 30 November 1999. He took part in a  number of operations as part of Operation Vijay, and was awarded a Commendation card by then General-Officer-Commanding in Chief Northern Command, Lt.General Hari Mohan Khanna. In the same year on 20 February 1999, he tied the knot with Ms Balwinder Kaur and was blessed with a baby girl later that year.  In the year 2000, his unit got deployed in the Rajasthan sector.