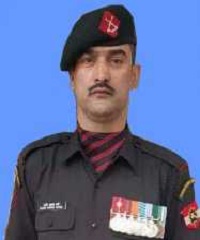 Lance Naik Nazir Ahmad Wani hailed from Cheki Ashmuji village in Kulgam district of Jammu and Kashmir. Once a militant in his younger days, he turned a new leaf and decided to join the Army in the year 2004. He was recruited into 162 Infantry Battalion(Territorial Army), which is affiliated to the Jammu and Kashmir Light Infantry Regiment of Indian Army. During his service he served in various operational areas and proved his mettle as a valiant and committed soldier.

Over the years, Lance Naik Wani was involved in 17 crucial counter-insurgency operations and received the gallantry award, “Sena Medal” twice(2007 and 2018) for his unwavering devotion to duty. It was commendable on the part of Lance Naik Wani to undertake operations under the prevailing circumstances when the terrorists had been selectively targeting Kashmiri soldiers, policemen and their families with alarming frequency.  However Lance Naik Wani epitomized qualities of a fine soldier and  always volunteered for challenging missions, displaying great courage under adverse circumstances. His courage got the recognition with the Sena Medal for gallantry in 2007 and again in 2018 which was given for eliminating one terrorist from very close quarters.

Throughout his Army service life Lance Naik Wani willingly faced grave potential threats and was a source of inspiration for others. Coming form a humble background Lance Naik Wani  was aware of the ground realities and was involved in working for the benefit of the underprivileged section in his village and surrounding area.

During Nov 2018, Lance Naik Nazir Ahmad Wani’s unit was deployed in Shopian district of J & K. Based on the information received form the intelligence sources about the presence of some hard core terrorists in Hirapur village in Shopian district, the security forces planned a search and cordon operation on 25 Nov 2018. Lance Naik Nazir Ahmed Wani was part of the team led by 34 RR battalion that was assigned the task of neutralizing the threat in that village.  Lance Naik  Wani along with his comrades reached the suspected area and quickly swung into action. He moved swiftly to the target house and positioned himself to block the escape route of the terrorists.

Taken by surprise and facing a precarious situation the terrorists started firing indiscriminately and lobbing grenades to breach the cordon in a bid to escape. Lance Naik  Wani undeterred by the barrage of bullets eliminated one terrorist and then moved forward to lob grenades into the room where another terrorist was hiding. Seeing the terrorist escaping from the window, he encountered him in a hand to hand combat  and despite being severely wounded managed to eliminated the terrorist. Showing utter disregard to his injuries, Lance Naik  Wani continued to engage the remaining terrorists with same aggression and audacity. He then shot and injured yet another terrorist at close range, but was hit again and grievously wounded. He later succumbed to his injuries and was martyred.

The Citation for Ashoka Chakra awarded to him reads :

Since his enrollment in the Army, Lance Naik Nazir Ahmad Wani, SM(Bar), epitomized qualities of a fine soldier. He always volunteered for the challenging mission, displaying great courage under adverse conditions, exposing himself to grave danger on numerous occasions in the line of duty. This is evident from the two gallantry awards conferred on him earlier.

On 25 November 2018, credible intelligence was received regarding the presence of six heavily armed terrorists in a village of Jammu and Kashmir. Tasked to block the most likely escape route. L/Nk Nazir Ahmad Wani moved swiftly with his team to the target house and tactically positioned himself within striking distance. Sensing danger, the terrorists attempted breaching the inner cordon firing indiscriminately and lobbing grenades. Undeterred by the situations. L/Nk Nazir held ground and eliminated one hardcore terrorist in a fierce exchange at close range.

Thereafter, displaying exemplary soldierly skills, L/Nk Nazir closed in with the target house under heavy fire and lobbed a grenade into a room where another terrorist was hiding. Seeing the foreign terrorist escaping from the window, he encountered him in a hand to hand combat situation. Despite being severely wounded, L/Nk Nazir eliminated the terrorist. Showing utter disregard to his injury, L/Nk Nazir continued to engage the remaining terrorists with same ferocity and audacity. He injured yet another terrorist at close range, but was hit again and succumbed to his injuries.

Lance Naik Nazir Ahmad Wani, Sena Medal** exhibited most conspicuous gallantry in personally eliminating two terrorists and assisting in evacuation of his wounded colleagues and made supreme sacrifice in the highest traditions of the Indian Army.