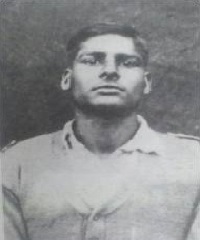 Lance Naik Lakha Singh was born on 2nd Feb 1933 in Balahra Marya village in Kangra district of Himachal Pradesh. Son of Shri Phana Ram, L/Nk Lakha Singh joined the army at the age of 22 years on 9th January 1956. He was recruited into 19 Punjab Bn of the Punjab Regiment, an Infantry Regiment well known for its brave soldiers and numerous battle honours.

During the 1965 Indo-Pak war, L/Nk Lakha Singh’s unit was deployed along the Cease-Fire Line(CFL) in the URI sector of J&K under 68 Infantry Brigade. Since early 1965 Pakistani troops on the Cease-Fire Line had started firing at India’s supply convoys. Slowly the infiltration from across the border also increased in the 1st week of Aug 1995 the gorilla forces from Pakistan as part of their “Operation Gibraltar” entered Kashmir valley to create widespread disturbances. The Haji-Pir Pass located 8 km from CFL inside Pakistan became one of the main routes for infiltration. Indian army then decided to capture Haji-Pir Pass to plug the infiltration route. The operation to attack and occupy Haji-Pir was termed “Op Bakshi”, named after Brigade Commander of  69 Infantry Brigade, Brigadier Zorawar Chand Bakshi. The Haji-Pir Pass was flanked by two ridges on the Eastern and Western sides. The operational plan was to occupy the shoulders of the pass first and then moving to capture the pass itself. 19 Punjab was given the responsibility to capture the Eastern Ridge.

During the battle for  the eastern ridge, the Charlie flight of 19 Punjab battalion was tasked to capture Point 877 under the leadership of Maj Parminder Singh. L/Nk Lakha Singh was part of the C’ Coy that was tasked for this operation. As the attack was in progress, L/Nk Lakha Singh ran out of his ammunition. But displaying great courage L/Nk Lakha Singh continued his advance using his bayonet to kill enemy soldiers. When the bayonet too broke, L/Nk Lakha Singh in a rare show of gallantry took off his helmet and started knocking the enemy soldiers out with it. However, he soon received a burst of enemy fire and was martyred.

L/Nk Lakha Singh was a valiant soldier who laid down his life in the service of the nation. He was given the gallantry award “Vir Chakra” for his outstanding courage, fighting spirit and supreme sacrifice. He is survived by his wife Smt Seetan Devi.

Citation for the “Vir Chakra” awarded to him reads:–

On the 21st September, 1965, in a company assault on an objective in Jammu and Kashmir area, Lance Naik Lakha Singh was in the leading section. In a hand to hand fight the enemy came so close that Lance Naik Lakha Singh could not change the empty magazine of his self-loading rifle. With great presence of mind, he took off his helmet and with it he hit three enemy soldiers one after another and injured them seriously. Subsequently he bayonetted another enemy soldier, but at this stage he was hit by a burst of enemy MMG fire and fell down. Even in this condition he continued firing on the enemy and killed 4 more men.