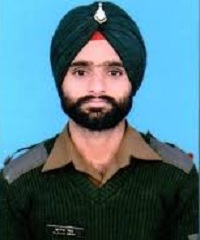 Lance Naik Karnail Singh hailed from Loha Khera village in Sangrur district of Punjab. Youngest among five siblings, he joined the Army in the year 2012 at the age of 20 years. He was recruited into 10 JAK Rif of the Jammu and Kashmir Rifles Regiment, an Infantry regiment  known for its courageous soldiers and various battle and theater honours. By the year 2020, he had completed around 8 years of service and served in various field areas.

During 2020 Lance Naik Karnail Singh’s unit, 10 JAK Rif was deployed in J&K along the LOC.  The LOC was highly active and volatile where ceasefire violations occurred very often and without any warning. The Krishna Ghati Sector in Poonch district of Jammu & Kashmir was the part of LOC that bore the brunt of a number of ceasefire violations every year. During Sep 2020, Lance Naik Karnail Singh’s unit was deployed in this sector and the troops of 10 JAK Rif were manning various forward posts along the LOC. Besides manning the forward posts the troops also undertook regular patrols to monitor the gaps between the posts.

On 30 Sep 2020 Pakistani troops violated the ceasefire in Krishna Ghati Sector and started heavy mortar shelling on Indian Army Posts. Pakistan Army initiated unprovoked and indiscriminate firing using small arms, automatic weapons and mortar shells. Indian Army retaliated strongly, effectively and proportionately to the unprovoked ceasefire violation and the exchange of fire continued for several hours. During the heavy exchange of fire, Lance Naik Karnail Singh got severely injured and was rushed to the nearby army hospital. However he succumbed to his injuries and was martyred. Lance Naik Karnail Singh was a disciplined and committed soldier, who laid down his life in the service of the nation.

Lance Naik Karnail Singh is survived by his parents, wife and son.