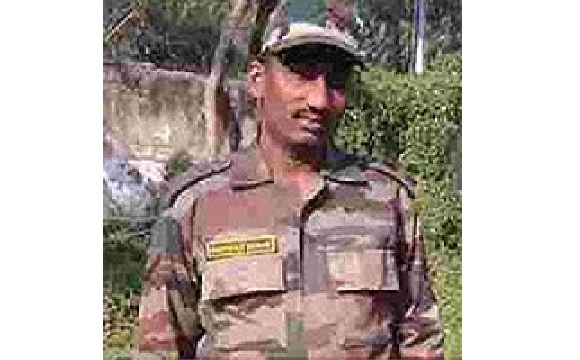 Lance Naik Kadam Sambhaji Yeshwantrao hailed from Janapuri village in Loha tehsil of Nanded district in Maharashtra.  He came from a very humble background and joined the Army after completing his school education. He was recruited into the 5 Maratha LI of the Maratha Light Infantry Regiment, an infantry Regiment known for its brave soldiers and rich history of various battle honours. After serving for a few years, he got married to Ms Sheetal and the couple was blessed with a daughter Tejaswini.
After serving with his parent unit 5 MLI, Lance Naik Kadam was later deputed to serve with the 17 RR battalion, deployed in J&K for counter-insurgency operations. By 2016, he had been promoted to the rank of Lance Naik and developed into a tough and devoted soldier.
Nagrota Army Base Attack (J&K) : 29 Nov 2016

During Nov 2016, Lance Naik Kadam was serving with 17 RR battalion based at Nagrota in J&K.  On the fateful day of 29th November a group of heavily armed terrorists attacked 116 Med Regt camp at about 5.30 am in Nagrota and killed four soldiers. Thereafter the terrorists entered two residential buildings, in an attempt to cause more casualties. Three terrorists took over vantage positions in two residential buildings that housed officers' families and a Mess. Major Kunal Gosavi of 116 Med Regt on being informed about the attack immediately swung into action and activated the unit's Quick Reaction Team(QRT).  In the meantime Maj Akshay Girish Kumar of the nearby 51 Engineering Regt and his unit’s Quick Reaction Team(QRT) also reached the site. The soldiers of CRPF too reached the site to provide support to the army.  A team of soldiers from 17 RR battalion too joined the joint operation against the terrorists. Lance Naik Kadam was part of the 17 RR team which quickly reached the site and took up positions to hem in the terrorists.

However in the ensuing exchange of fire, Lance Naik Kadam received gun shots and got seriously injured. He later succumbed to his injuries and was martyred. Lance Naik Kadam and his comrades not only engaged the terrorists and prevented the evil designs of the terrorists to take hostages and massacre innocents, but they also ensured that the terrorists could not spread out in the camp area and harm important military assets. However during the operation, besides Lance Naik Kadam Sambhaji Yeshwantrao , six other soldiers made the supreme sacrifice which included Major Akshay Girish, Major Kunal Gosavi Mannadir, Hav Sukhraj Singh, Naik Chittaranjan Debbarma, Grenadier Raghavendra Singh and Rifleman Asin Rai.