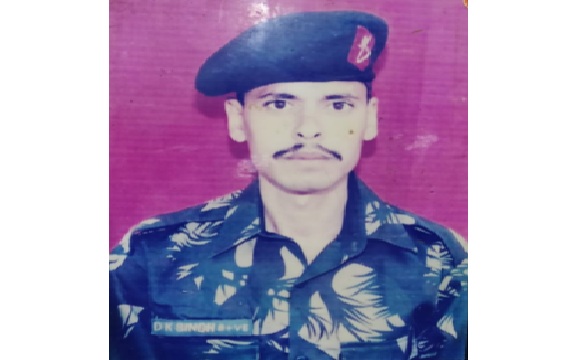 Lance Naik Dharmendra Kumar Singh hailed from Kunjbanna village in Pirpainti tehsil of Bhagalpur district in Bihar and was born on 01 Nov 1972.  Son of Shri Ishwar Dayal Singh and Smt Kishori Singh, he was the youngest among 9 siblings. He was good in academics and completed his intermediate from Mokama in the Patna district of Bihar. He had seven sisters as siblings and even though the youngest child, he realized his responsibilities quite early in life.

He joined the army after completing his school education on 26 June 1992, at the age of 19 years. He was recruited into the Corps of Signals, an important arm that provides communication to the Indian army during war and peace. After serving for a couple of years, L/Nk DK Singh got married to Ms. Babita Singh in the year 1995 and the couple had a son Robin Singh (born in 1997) and daughter Isha Singh (born in 1998). Later L/Nk DK Singh was deputed to the 14 RR battalion deployed in J & K for counter-insurgency operations. By 2003, L/Nk D K Singh had served for around 11 years in various operational areas in different parts of the country.

During 2003, L/Nk DK Singh’s battalion was deployed in the Baramulla district of J&K. As a number of militants were active in the AOR(Area of Responsibility) of the unit, the troops were engaged in counter-insurgency and counter-infiltration operations on a regular basis. The unit was also part of the ongoing “Operation Parakram” launched by the Army in Dec 2001. On the night of 15/16 May 2003, L/Nk DK Singh’s unit had received information from intelligence sources about the presence of terrorists in a village in the Baramulla district. It was decided to launch a search and destroy operation to flush out the terrorists. L/Nk DK Singh was made part of the team that was assigned to undertake this operation.

I the early morning of 16 May 2003, L/Nk DK Singh and his comrades observed some suspicious movement and soon made contact with the terrorists. However the terrorists opened indiscriminate fire on being challenged. Realizing the safety of his comrades to be at stake, L/Nk DK Singh with utter disregard to personal safety, retaliated with effective fire. However during the heavy exchange of fire, L/Nk DK Singh received gunshots and got severely injured.  He later succumbed to his injuries and was martyred. L/Nk DK Singh displayed commendable courage, determination and devotion to duty and laid down his life in the service of the nation.

This profile is currently being maintained by www.honourpoint.in. However, we would invite the family members, unit/formation, or former colleagues of this brave soldier to contribute additional information and maintain this memorial site as well, thereby assisting us in our endeavour to spread awareness about this great Indian and inspire future generations.