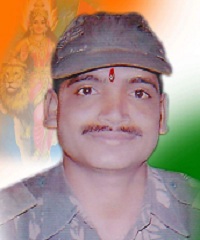 L/Nk Bachhav Shashikant Ganpat hailed from Dabali village of Waner tehsil in Nasik district of Maharashtra. Son of Shri Bachhav Ganpat, L/Nk Bachhav Shashikant was born on 1st June 1979. After completing his ITI Diploma from Malegaom, he joined the army at the age of 21 years. He was recruited into 9 MLI of the Maratha Light Infantry Regiment, an infantry regiment well known for its gallant soldiers.

During the year 2007, L/Nk Bachhav Shashikant’s unit was deployed in the Baramulla district of J&K for counter-insurgency operations. On 31 July 2007, his unit received information from the intelligence sources about a group of terrorists attempting to sneak across the Line of Control in the Uri sector. The Commanding officer of the unit, Col Vasanth after analyzing the situation, decided to launch a search and destroy operation to deal with the terrorists. Realizing the critical importance of the mission, Col Vasanth himself took over the command of the operation and led a pre-dawn raid, against the terrorists. L/Nk Bachhav Shashikant was part of the team that was tasked to undertake that operation.

On reaching the suspected area the troops soon spotted the terrorists and challenged them. The terrorists opened fire at the troops on being challenged. A heavy gun battle ensued thereafter lasting for a long time. However, during the exchange of fire L/Nk Bachhav Shashikant, his commanding officer and two other soldiers got injured. L/Nk Bachhav Shashikant later succumbed to his injuries and was martyred. L/Nk Bachhav Shashikan was a valiant and commited soldier who laid down his life at the age of 28 years in the service of the nation. He was given the gallantry award, Shaurya Chakra for his excemplery courage, devotion to duty and supreme sacrifice.