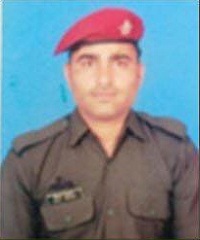 Lance Havaldar Vijay Kumar hailed from Sagwan village of Bhiwani district in Haryana. Born on 20 August 1981, he joined the Army on 29 September 2001 at the age of 20 years. He was enrolled into 23 PARA of the Parachute Regiment, a regiment known for its intrepid soldiers and numerous daredevil operations.

During 2018, Lance Havaldar Vijay Kumar’s unit was deployed in south Kashmir for counterinsurgency operations. The unit was engaged in operations against the militants and faced challenging situations on a regular basis. On receiving information from the intelligence sources about the presence of some hardcore terrorists in Shopian district of south Kashmir, a decision was taken by the security forces to launch an operation to nab them. Consequently, a joint operation was launched on 20 Nov early morning comprising the elements of  34 RR, 23 PARA and SOG(Special Operations Group) of the J & K Police. Lance Hav Vijay Kumar from 23 PARA was part of the joint team that was assigned the task.

The joint team as planned reached the suspected area in Nadigam village of Shopian district and launched the search and cordon operation at around 2 AM on 20 Nov 2018. A total of four terrorists were hiding in a house in the village. At around 0415 hrs on 20th Nov, as the search of the target house was under progress, three terrorists jumped out of the window and tried to escape. Lance Hav Vijay Kumar immediately swung into action and opened fire, neutralizing the first escaping terrorist. The remaining two terrorists then attacked the troops by firing indiscriminately. The joint team managed to gun down the second terrorist too. However, during the heavy exchange of fire, Lance Hav Vijay Kumar suffered multiple gunshot wounds and was grievously injured. He later succumbed to his injuries and was martyred.

Lance Havaldar Vijay Kumar was a valiant and dedicated soldier who laid down his life in the service of the nation. He is survived by his wife and three children.