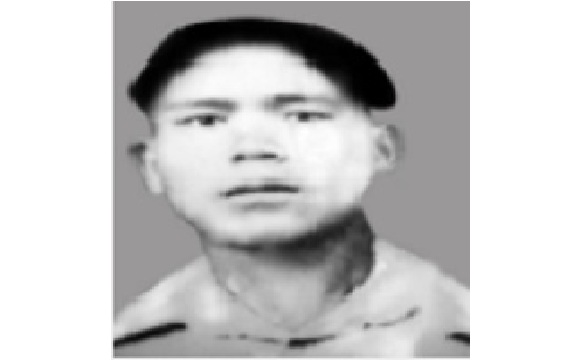 Lance Hav Tek Bahadur Gurung hailed from Thumi village in Gorkha district of Nepal and was born on 10th Nov 1938. After his preliminary education, he joined the Army and was recruited into the  Parachute Regiment of the Indian army. Later on, he joined 4 Para (Special Forces), the elite unit of Indian Army raised in 1961.

Indo-Pak war of 1971 ended on 16 Dec 1971 with a decisive victory for Indian forces on the eastern front. Despite the cease-fire, Pakistani forces took a provocative step of occupying a Sand Dune in Nagi village located in Sri Karanpur tehsil in Sri Ganga Nagar district of Rajasthan. The enemy forces had occupied the Indian territory probably with an intention to embarrass the Indian Army and avenge to a small degree the humiliation they had suffered in the war. 4 Para (SF) under the commando of 51 (Independent) Para brigade of the Indian Army was tasked to evict the enemy forces and regain control of the area. It was decided to launch the attack with the elements of 4 Para, 9 Para field regiment and 410 field company on 27 Dec 1971. L/Hav Tek Bahadur Gurung was part of 4 Para troops tasked to undertake the attack.

L/Hav Tek Bahadur Gurung was section commander in a company of the Parachute Regiment, which came under heavy artillery and machine-gun fire. When the light machine gunner was fatally wounded, L/Hav Gurung immediately picked up the gun and pressed on with the attack. On reaching the objective, he charged the enemy machine gun bunkers, lobbed a grenade and silenced the machine gun. Meanwhile, a burst from another machine gun hit him in the chest and he was martyred. The troops of 4 Para continued their advance and finally succeeded in reclaiming the Nagi Sand Dune by 6 am on 28 Dec 1971. However, during the fierce battle, 21 soldiers laid down their lives. L/Hav Tek Bahadur Gurung was one of the 21 soldiers martyred during the operation.

Lance Havaldar Tek Bahadur Gurung was section commander in a company of the Parachute Regiment, which was assigned the task of capturing an area in the Ganganagar Sector. The company came under heavy artillery and machine-gun fire. When the light machine gunner was fatally wounded, Lance Havaldar Gurung immediately picked up the gun and pressed on with the attack. On reaching the objective, he charged the enemy machine gun bunkers, lobbed a grenade and silenced the machine gun. Meanwhile, a burst from another machine gun hit him in the chest as a result of which he died. In the action, Lance Havaldar Gurung displayed gallantry, determination, and leadership of a high order.