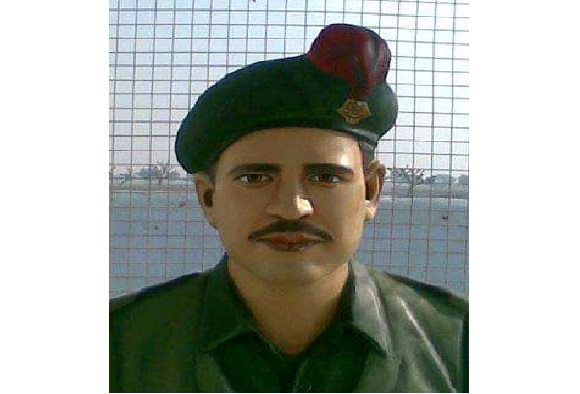 Lance Havaldar Shishpal Singh hailed from Dabri village of Nagaur district in Rajasthan was born on 05th Apr 1928. Son of Shri Moti Singh, L/Hav Shishpal Singh had inclination to join the Armed Forces since his younger days like many young boys of Rajasthan. Following his dream, he eventually joined the Army,  after completing his education on 03 June 1947 at the age of 19 years. He was recruited into the 20 Rajput battalion of the Rajput Regiment, an infantry Regiment well known for its fearless soldiers and many battle exploits.

By the year 1961, he had put in over 14 years of service and had been promoted to the rank of Lance Havaldar. By then he had evolved into a dedicated soldier with commendable field-craft skills. When India decided to launch "Operation Vijay" in 1961 against the Portugese forces, L/Hav Shishpal Singh's unit 20 Rajput got deployed in Diu as part of this operation.

As years of negotiation did not yield any result, the Indian government decided to deploy the armed forces in an effort to evict the Portuguese out of Goa and other Enclaves. Consequently in November 1961, Lt Gen Chaudhari of the Southern Army deputed 17 Infantry Division under Major General KP Candeth along with the 50th Para Brigade to carry out the task of liberating Goa , Daman and Diu.  The air operations were delegated to Air Vice Marshal Erlic Pinto and the Navy was entrusted to create a suitable Task Force to support the operations. The task of occupation of Diu, was assigned to L/Hav Shishpal Singh's unit 20 Rajput and another battalion of 4th Madras, along with the support of Indian Naval ships INS Delhi and INS Dharini.

Diu was a tiny 40 sq kms island off the Gujarat coast, and at that time there were no bridges across the creek. The island was held by approximately 500 Portuguese soldiers, supported by artillery and the Patrol Boat Vega which had a formidable 20 mm Oerlikon Gun. While the main defences were based in the Diu Fort, the Portuguese had covered the crossings with artillery, mortars and machine guns.  The Indian forces decided to cross the creek braving chest high water and muddy swamps and using improvised rafts. L/Hav Shishpal Singh and his comrades attempted initial crossings in the night of 17 Dec 1961 but proved unsuccessful in the face of well-directed artillery and mortar fire. However the IAF air attacks at 0700 hrs next day made the enemy positions untenable, forcing the enemy forces to withdraw to the fort.

Following the successful air attacks L/Hav Shishpal Singh and other troops of 20 Rajput and 4 Madras launched the ground attack on 18 Dec 1961 to occupy the island. In the ensuing gun battle L/Hav Shishpal Singh and his comrades displayed commendable gallantry and took out the bravado from the Portuguese forces holding the fort.  By the evening, a total of 403 enemy soldiers were taken prisoners including the Governor General and the operation was successful. However during the exchange of fire L/Hav Shishpal Singh received gunshots and was severely injured. He later succumbed to his injuries and was martyred.  Lance Hav Shishpal Singh was a brave and committed soldier who laid down his life in the service of the nation. He was awarded with Ashok Chakra -3 (Now renamed as Shaurya Chakra) posthumously on 15 August 1962 for his raw courage, leadership and supreme sacrifice.