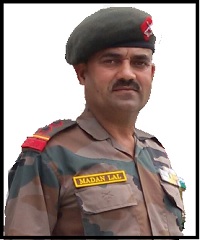 Hony Lt Madan Lal Choudhary was born on 10th Sep 1968 in Bakrak village of Kathua District in Jammu & Kashmir. He joined the Army on 30 Dec 1988 at the age of 20 years. He was recruited into 1 JAK LI of the Jammu and Kashmir Light Infantry Regiment, a Regiment known for its fearless soldiers and various battle honours. By 2018, he had put in nearly three decades of service and had served in various operational areas with challenging conditions. During his long service period, he served in Nowshera sector (J&K), Poonch, Siachen glacier, IMA Dehradun (Field-craft instructor) and IMTRAT Bhutan before being posted to Sunjuwan military station.

The Sunjuwan Army Camp is located along the Jammu-Lakhanpur bypass near Jammu and is a sprawling campus of over 100 acres. On 10 Feb 2018 in the early morning, a group of heavily armed terrorists struck the camp of the 36 brigades of Jammu and Kashmir Light Infantry at Sunjuwan.  The soldiers and their families were sleeping when the terrorists struck in the dark, firing indiscriminately. The terrorists had managed to sneak into the camp from the rear side of the base after a brief exchange of fire with the sentry on its periphery. The terrorists entered the family accommodation complex and barged into the JCOs’ family quarters.

The terrorists were fully armed with AK 47 rifles and hand grenades and were determined to cause maximum casualties. Hony Lt Madan Lal Choudry heard the gunshot sounds in the quarters and immediately rushed towards the door, where terrorists were present. Hony Lt Choudhary in a rare display of courage did not allow the terrorists to enter his house. He faced a group of heavily armed terrorists with bare hands, took scores of bullets on his chest and arms, yet ensured that the assailants could not inflict much harm on his family.

Hony Lt Madan Lal Choudhary was shot from a close range and was martyred but showed exceptional courage and presence of mind in dealing with the crisis situation. Besides Hony Lt Madan Lal Choudhary, four other soldiers were martyred in the operation which included Sub Mohammad Ashraf Mir, Hav Habibullah Qurashi, Nk Manzoor Ahmed and LanceNaik Mohammad Iqbal. Soon Army personnel in bullet-proof vehicles got engaged in the operation to rescue people from the family quarters in the rear side of the base. Subsequently, the army’s special forces also joined the operation against the terrorists which continued for nearly 72 hours, when all of them were finally neutralized.

Tribute by his daughter Neha Choudhary :

Ms Neha Choudhary, who herself got bullet injuries in Sunjuwan Army Camp Attack, pays tribute to her valiant father, Hony Lt Madanlal Choudhary, martyred while battling the terrorists on 10 Feb 2018…….

Who says, super heroes do not exist in reality? They certainly do, in olive green uniform and I have witnessed one such “Super-Hero”, in the form of my father, who faced death so fearlessly and saved the lives of many, during the terrorists’ attack on that day.

I vividly remember that Saturday for the courage, valour, grit and resoluteness of my father, the “Soldier”. It all started around 4: 45 hrs when heavily armed terrorists, having penetrated through the multiple tier security, reached our doorstep and started firing indiscriminately. I was hit by a bullet, just below the knee and my father too, took direct hits. Despite being hit by multiple bullets on his chest, he in a rare show of courage kept the terrorists engaged and alerted all the people living in the surrounding quarters (more than hundred quarters). This timely and gallant response not only resulted in saving all the trapped women, children and unarmed men but also prevented large-scale collateral damage.

Being a daughter, I shared a special bond with my father and I believed that he had the magical power to turn my sorrows into joy. My deep respect for him stemmed from the fact that besides being a wonderful father, he was a great son, a caring husband, a die-hard soldier and above all a great human being. At times, I feel vulnerable without his presence but soon I regain my strength by reminding myself that, “I am the daughter of a soldier”. I also remember his often-repeated profound words, “Man wearing uniform is a soldier first, and then a father”.

Life seemed impossible at one time, when I was lying helplessly having my leg bone crushed with the bullet hit. I could not get up or touch him and could not even bid him farewell during his last journey. Equally painful was seeing my broken mother carrying the burden of responsibilities, but my father’s courage gave me strength to take life in its stride. I also salute other martyrs of the #SunjuwanAttack, Sub Mohammad Ashraf Mir, Hav Habibullah Qureshi, Naik Manzoor Ahmed, Lance Naik Mohmmad Iqbal and Hav Rakesh Chandra.

When life gives hard time, one has two choices; either to let it destroy or let it strengthen oneself. I have chosen the second option, following the path shown by my “Super-Hero”-my father.