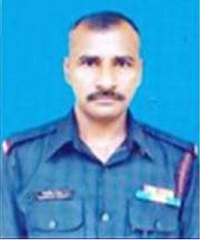 Hav Nimb Singh Rawat hailed from Rajsamand district in Rajasthan. He belonged to 6 Bihar Regiment and was among the 19 brave hearts who laid down their lives in the line of duty in September 2016 when Pakistani terrorists struck the Army’s Administrative base in Uri sector of J & K.