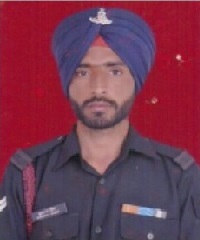 Hav Sukhraj Singh hailed from the village Maan Nagar in Gurdaspur district of Punjab. Son of Shri Hardev Singh and Smt Swarnajeet Kaur, and was born on 24 Apr 1984. Hav Sukhraj joined army in the 2004 and was recruited into to 166 Medium Regiment based at Nagrota base camp near Jammu. By 2016, Hav Sukhraj Singh had put in 12 years of service and valiantly fought with the terrorists at the Nagrota base camp near Jammu, when it was attacked in Nov 2016.
Nagrota Base Attack : Nov 2016:
Hav Sukhraj Singh was one of the seven soldiers who were martyred while fighting terrorists Nagrota base camp on 29 November 2016. On that day  at around 5:30 IST, three terrorists wearing police uniforms entered the base which housed nearly 1,000 soldiers just about 20 kilometres from Jammu. They attacked the Indian Army’s 166 Field Regiment unit in the town of Nagrota, near Jammu city. The toughest part of the counter-terror operation was in preventing a potential hostage crisis.
The terrorists had entered a part of the complex where families of soldiers lived and then slipped into different rooms.That placed at risk at least four unarmed officers, the wives of two officers and two babies. The process of extricating the women and children was extremely dangerous. The women used “household items” to block potential entry points in the living quarters. The militants divided themselves into two groups, entered the living quarters of the base and opened fire with AK-47s and grenades.

In the resultant gun battle, all three militants were killed and the hostages were freed by the Indian Army. The nation will remain grateful to Hav Sukhraj Singh for his courage and supreme sacrifice.