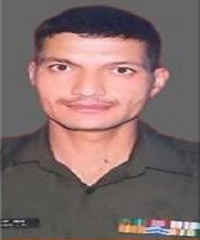 Hav Roshan Lal hailed from Nichla village in Ghagwal tehsil of Samba district in Jammu and Kashmir. He joined the Army in 1995 and was recruited into 15 JAK Li of the J&K Light Infantry regiment known for its brave soldiers and various battle honours. During 2017-18, Hav Roshan Lal’s unit was deployed in Rajouri district of J & K.

Indian Army gave a befitting reply and a fierce cross-border exchange of fire ensued. During this heavy exchange of fire Hav Roshan Lal, who was on duty on one of the forward posts got seriously wounded along with an officer Capt Kapil Kundu and two more soldiers of his unit. They later succumbed to their injuries and were martyred. Hav Roshan Lal was a committed soldier who laid down his life in the service of the nation.