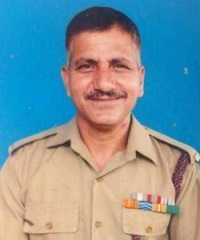 Hav Jagdish Chand hailed from Chamba district in Himachal Pradesh. After retiring from the Army, Hav Jagdish Chand joined the Defence Service Corps, a force responsible for the security of the defence establishments. He was transferred to 546 DSC Platoon based at Air Force Base Pathankot in the late 2015 after serving for some time in Leh.

Hav Jagdish Chand was serving with 546 Defence Service Platoon attached with 18 Wing Air Force Base at Pathankot. On the night 02 Jan 2016 at 0330 hr, five to six heavily armed terrorists entered the lines and opened indiscriminate fire on the troops.  The heavy firing resulted in two of Hav Jagdish Chand’s  colleagues being fatally wounded.  Displaying courage and presence of mind Hav Jagdish Chand  in utter disregard to his own safety ran after the closest terrorist, chased and overpowered him.  He snatched the terrorist’s weapon and shot him dead.  However during this process, two more terrorists in vicinity opened fire at Hav Jagdish Chand wounding him seriously. He succumbed to his injuries and was martyred.

Hav Jagdish Chand was given the nation’s second highest peace time gallantry award, “Kirti Chakra” for his cold courage, fighting spirit and supreme sacrifice. He is survived by his wife, a son, and two daughters.

He was awarded Kirti Chakra 0n 26th Jan 2016 and his citation reads:

Sepoy Jagdish Chand was posted with 546 Defence Service Platoon attached with 18 Wing Air Force.  On the night 01/02 Jan 2016 at 0330 hr while the individual was working on bonafide military duty at Defence Service Corps lines, five to six heavily armed terrorists entered the lines and opened indiscriminate fire on the troops working in the said location.  The heavy firing resulted in two of his colleagues being fatally wounded.  Showing presence of mind and conspicuous bravery Sepoy Jagdish Chand unmindful of his own safety ran after the closest terrorist, chased and overpowered him.  Sepoy Jagdish Chand snatched the terrorist’s weapon to shoot him dead.  In the process, two more terrorists in vicinity opened fire on Sepoy Jagdish Chand killing him on the spot.