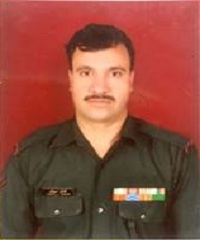 Hav Habibullah Qureshi hailed from Batapora village, which is close to the LoC in Kupwara district of north Kashmir. He belonged to a military family, as his father also retired from army and he was inspired by his father to join the army.

He belonged to 1 JAK Li unit of the J&K Light Infantry, which was deployed in J & K and was stationed in the Sunjuwan camp of 36 Brigade during 2018.

The Sunjuwan Army Camp is located along the Jammu-Lakhanpur bypass near Jammu and is a sprawling campus of over 100 acres. On 10 Feb 2018 in the early morning, a group of heavily armed terrorists struck the camp of the 36 brigades of Jammu and Kashmir Light Infantry at Sunjuwan.  The soldiers and their families were sleeping when the terrorists struck in the dark, firing indiscriminately. The terrorists had managed to sneak into the camp from the rear side of the base after a brief exchange of fire with the sentry on its periphery. The terrorists entered the family accommodation complex and barged into the JCO family quarters.

The terrorists were fully armed with AK 47 rifles and hand grenades and were determined to cause maximum casualties. Hony Lt Madan Lal Choudry heard the gunshot sounds in the quarters and immediately rushed towards the door, where terrorists were present. Hony Lt Choudhary in a rare display of courage did not allow the terrorists to enter his house. Hony Lt Madan Lal Choudhary was shot from a close range but his gallant engagement with the terrorists saved the lives of his family members. He was martyred but showed exceptional courage and presence of mind in dealing with the crisis situation.

Soon Army personnel in bullet-proof vehicles got engaged in the operation to rescue people from the family quarters in the rear side of the base. Subsequently, the army’s special forces also joined the operation against the terrorists which continued for nearly 72 hours, when all of them were finally neutralized. During the intense operation with a heavy exchange of fire, Sub Mohd Ashraf Mir, Hav Habibullah Qureshi, Hav Rakesh Chandra, Nk Manzoor Ahmed Deva & Lance Naik Mohd Iqbal Sheikh got severely injured and later succumbed to their injuries.

Havildar Habibullah Qureshi was a valiant and committed soldier who laid down his life in the service of the nation. He is survived by his parents, wife Hamida Bano and six young daughters.