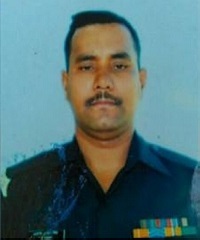 Havaldar Ashok Kumar Singh was a resident of village Bhojpur, in Bihar. He belonged to 6 Bihar Regiment and was among the 19 brave hearts who laid down their lives in the line of duty in September 2016 when Pakistani terrorists struck the Army’s Administrative base in Uri sector of J & K. He had joined Indian Army in the year 1992.

Hav Ashok Kumar Singh is not the first son Jagnarain Singh, 78(who has been blind for the last 20 years) has lost. His elder son Kamta Singh, who was also a soldier in the Indian Army was killed in a bomb blast in Bikaner in 1986 during the height of the Sikh insurgency at an age of 23. Even after having to lose his second son, Jagnarain Singh said he was extremely proud of his two sons having served the country to their last breath.

Havaldar Ashok Kumar Singh is survived by his father (Jagnarain Singh), his wife (Sangeetha), his eldest son ( Vikas Singh, joined the army recently and is posted as a sepoy at the Danapur Cantonment), his youngest son (Vishal, is studying in a college in Arrah.)

Hav Ashok Kumar was one of the 19 soldiers who was martyred in Uri Attack in Sep 2016.  At around 5:30 a.m. on 18 September, four militants attacked an Indian Army brigade headquarters in Uri, near the Line of Control in a pre-dawn ambush. They lobbed 17 grenades in three minutes followed by indiscriminate firing by automatic weapons. As a rear administrative base camp, the HQs had a fuel storage facility, which caught fire along with tents with soldiers sleeping in them. As a result of this dastardly attack, 17 army personnel were martyred.

A gun battle ensued that lasted for six hours, during which all the four militants were killed. An additional 19-30 soldiers were also reported to have been injured in the attack. Most of the soldiers martyred were from the 10 Dogra and 6 Bihar regiments. One of the injured soldiers succumbed to his injuries on 19 September at R&R Hospital in New Delhi, followed by another soldier on 24 September, bringing the death toll to 19.

The nation will remain grateful to  Hav Ashok Kumar for his courage and supreme sacrifice.