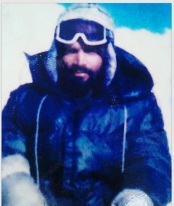 Havaldar Tukaram V Patil hailed from Vasigaon in Sangli district of Maharashtra. He joined the army after completing his school education, following into the footsteps of his elder brother. He was recruited into 4 MLI of the Maratha Light Infantry Regiment, an infantry regiment well known for its gallant soldiers. After completing his training he served in various challenging areas and developed into a tough and devoted soldier. By 1993, he had gather substantial experience and had been promoted to the rank of Havaldar.  Tukaram is survived by his wife and three children.

During 1993, Hav Tukaram was serving in Siachen area, known as the highest battlefield in the world with extremely hostile weather conditions. The soldiers deployed as part of Op Meghdoot at Siachen had to fight not only the treacherous enemy but the extreme hostile weather too on a daily basis. The soldiers had to depend on air maintenance sorties to meet their personal as well as operational requirements. It meant that the soldiers survived by rations and stores that were para-dropped from aircraft. Even the collection of the dropped stores was a difficult exercise involving many soldiers. Hav Tukaram was taking part in one such exercise on 27 Feb 1993.

That day, Hav Tukaram was part of a “link patrol” — roped soldiers — who were returning to the “Bila complex”, a fortified army post, at 17,000 feet from “drop zone”. While returning from the drop zone, Hav Tukaram’s patrol found that one of the crates had fallen about 200 meters away from their route. Hav Tukaram offered to retrieve it, without caring for his own safety. He had to unhook himself from the “link” that kept him roped to the others in the patrol. He trudged through the snow and as he picked up the nylon of the parachute to which the crate was hitched, the snow under his feet gave away.

Hav Tukaram's comrades shouted to him to keep holding the parachute even as he dangled over the crevasse. They got to the nylon chords and were slowly pulling him back when Hav Tukaram's gloves – mittens, gave away as the nylon had cut through the thin wool. Hav Tukaram got submerged under tons of snow and was martyred. His body could not be recovered for many years. In August 2014, an army patrol of the 12 Madras, found Hav Tukaram’s remains after 21 years of his martyrdom. At the time of recovery, the rope was still in Hav Tukaram’s remains around the waist. There were two letters in a breast pocket of the uniform. One was from home and the other was a document that certified that he was medically fit for being posted in Siachen. Unfortunately Hav Tukaram's brother too had lost his life in Siachen in 1987 while serving with 6 MLI battalion. Hav Tukaram was a valiant and devoted soldier who laid down his life in the line of his duty.

Hav Tukaram V Patil is survived by his mother, wife and three children.