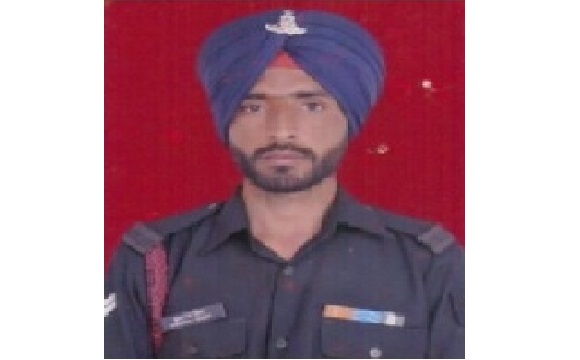 Hav Sukhraj Singh hailed from the Maan Nagar village in Gurdaspur district of Punjab and was born on 24 Apr 1984. Son of Shri Hardev Singh and Smt Swarnjeet Kaur, Hav Sukhraj joined the Army in the year 2004 at the age of 20 years. He was recruited into to 166 Medium Regiment of the Regiment of Artillery, an important combat support  arm of Indian Army. By 2016, he had put in around 12 years of service and had been promoted to the rank of Havildar.
Nagrota Base Attack : 29 Nov 2016

During Nov 2016, Hav Sukhraj Singh was serving with 116 Med Regt based at Nagrota in J&K.  On the fateful day of 29th November a group of heavily armed terrorists attacked 116 Med Regt camp at about 5.30 am in Nagrota and killed four soldiers. Thereafter the terrorists entered two residential buildings, in an attempt to cause more casualties. Three terrorists took over vantage positions in two residential buildings that housed officers' families and a Mess. Major Kunal Gosavi of 116 Med Regt on being informed about the attack immediately swung into action and activated the unit's Quick Reaction Team(QRT). Hav Sukhraj Singh was part of the QRT which quickly reached the site and moved the injured soldiers and family members to safety. Hav Sukhraj Singh and his comrades cordoned off the area to safeguard the soldiers and their families in the residential area. In the meantime Maj Akshay Girish Kumar of the nearby 51 Engineering Regt and his unit’s Quick Reaction Team(QRT) also reached the site. The soldiers of CRPF too reached the site to provide support to the army.