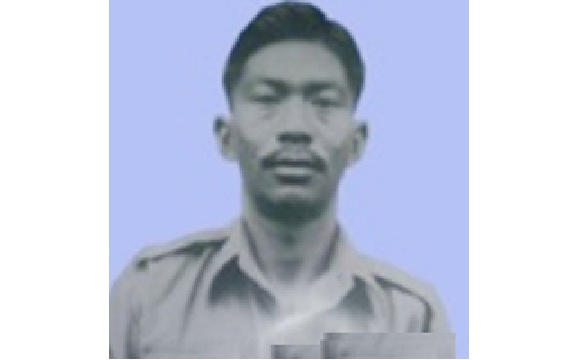 Havildar Shere Thapa hailed from Nepal and was born on 27 Dec 1928.  After completing initial education, he joined the J and K Regiment Special Force on 27 Dec 1945 at the age of 17 years.  He served with the J and K Regiment Special Force till 31 Dec 1956 and later became part of Indian Army.  He was transferred to 2 JAK Rif battalion of the well-known Jammu and Kashmir Rifles Regiment, an infantry regiment widely respected for its intrepid soldiers and numerous battle exploits.

After serving for few years, he got married to Ms Dilli, and the couple had three daughters Dhanisara, Syani and Nurma. By the year 1962, he had developed into a tough and dedicated soldier and had been promoted to the rank of Havildar.  In the year 1962, up to March, 2 JAK Rif was at Palampur in Himachal Pradesh concentrating for training for jungle warfare in preparation for its field tenure in the North East. However, as the tensions on the Sino-Indian border mounted, orders were received for its move to NEFA, the present-day Arunachal Pradesh. The unit left Pathankot on 25 April 1962 and reached Jorhat after eight days, on 03 May 1962.  Hav Shere Thapa along with his unit troops got deployed at Subansiri Frontier Division of NEFA.

In November 1962, Hav Shere Thapa was deployed in protective patrol in Tama Chung Chung ridge near Rio Bridge in Upper Subansiri Valley of Arunachal Pradesh covering the track coming in from Indo- China border. He was part of A Company and appointed as platoon havildar under subedar Sher Bahadur. The company was functioning under the command of  2nd Lt Amar Patil. On 18 Nov 1962, the Chinese Army (People’s Liberation Army) launched an offensive in the Subansari Sector of NEFA and contacted the protective patrol at about 1500 hrs. The protective patrol was established in a rocky outcrop area south of the confluence of Ngo stream, the main source of Subansari River dominating steep slippery track from the border coming down Tama Chung Chung ridge.

At about 1500 hours, Chinese were seen approaching the area of the protective patrol. As soon as the Chinese came in the effective range of the 2 JAK Rif troops, Hav Shere Thapa and his comrades opened fire with light machine guns, 2 inch mortars and rifles. The Chinese were taken by surprise and suffered very heavy casualties in dead and wounded.  The patrol withdrew to Ging only when their entire ammunition had been expended and only some LMG ammunition was left. The LMG was initially being manned by Rifleman Inder Singh but when he got injured, he was evacuated and Hav Shere Thapa took over the LMG. Hav Thapa volunteered to cover the withdrawal of the platoon and relentlessly kept on effectively engaging the Chinese. When the platoon was safely away, he decided to extricate himself but succumbed to the onslaught of enemies who were coming over their dead soldiers.

Hav Shere Thapa's action and the destruction of the bridge at Rio (Rihuye in Chinese accounts) delayed the Chinese for nearly 72 hours.  The mortal remains of Hav Shere Thapa were buried by the Chinese at the same spot where he laid down his life. The Chinese, in a show of magnanimity, wrote a small note of appreciation of his bravery on a piece of wood. This was a unique gesture by the enemy very rarely seen in the history of warfare. The locals who had witnessed the battle informed that the Chinese had suffered more than 150 casualties including 70 dead with one senior officer. Hav Shere Thapa was a valiant and committed soldier who laid down his life at the age of 34 years in the service of the nation.

Hav Shere Thapa is survived by his wife Smt Dilli, and daughters Dhanisara, Syani and Nurma.