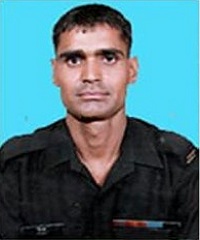 Hav Satvir Singh hailed from Khajpur village of Mathura district in Uttar Pradesh and was born in the year 1981. After completing his school education he joined the Indian Army in 2000 at the age of 19 years. He was recruited into 16 Jat battalion of the famed Jat Regiment, an infantry regiment known for its fearless soldiers and numerous battle honours. By the year 2019, he had been promoted to the rank of Havaldar and had gained experience of working in various operational areas.

During 2019, Hav Satvir Singh’s unit was deployed in the Kashmir valley along the LOC. The unit troops were manning the forward posts in the Kupwara district along the LOC. Besides manning the posts, the unit soldiers had to undertake armed patrols regularly to monitor the area under its AOR ( Area of Responsibility). The posts were located in high altitude areas with inhospitable weather conditions and rugged terrain. Many posts, as well as the patrol routes of the unit, were prone to snow blizzards and unpredictable avalanches during winter seasons. One such avalanche struck the post of 16 Jat on 31 Mar 2019. Hav Satvir Singh was part of the team that was manning the post that day.

The magnitude and suddenness of the avalanche did not give any chance to the soldiers to take any evasive action. Hav Satvir Singh and his comrades went missing and got buried under a huge amount of snow. Army launched a massive rescue operation with specialized equipment despite very hostile weather conditions. The rescue team eventually managed to extricate the body of Hav Satvir Singh after extensive search. Hav Satvir Singh had lost the battle for life owing to very prolonged exposure to extreme cold conditions. Hav Satvir Singh was a valiant and dedicated soldier who laid down his life at the age of 38 years in the line of his duty.

Hav Satvir Singh is survived by his wife, two daughters and a son.