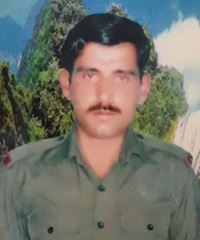 Havaldar Mahabir Singh was born on 01 Oct 1959 in Maina village of Rohtak district of Haryana. He was son of Subedar Kapoor Singh, who too had also served in Indian army and had  sacrificed his life in the service of nation. Inspired by his father, at the age of 20, Hav Mahabir Singh joined the Indian army on 10 Jan 1979 and was recruited into the Rajputana Rifles Regiment, a regiment well known for its gallant soldiers.
Mine Clearance Operation: 20 Aug 1992
During 1992, Hav Mahabir Singh’s unit 14 Raj Rif was deployed at Nashribad in Rajasthan. By that time Mahabir Singh had put in about 13 years of service and had served in various operational areas with different terrain and working conditions. On 20 August 1992,  Hav Mahabir Singh and his comrades were tasked to clear old landmines laid by the unit for training purpose. Hav Mahabir Singh during his service had attained expertise in handling and defusing these mines. However, these activities, at anytime, are fraught with danger and  remain risky. Unfortunately, on that day while defusing the mines one of them exploded and injured Hav Mahabir Singh very seriously. He was immediately shifted to the nearby army hospital but it did not help. He later succumbed to his injuries and was martyred.
Hav Mahabir Singh was a valiant soldier who laid down his life in the line of his duty, displaying a very high order of courage, commitment & devotion to duty. Hav Mahabir Singh is survived by his mother, wife Urmila, two daughters and a son Naveen.