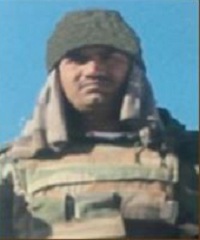 Havaldar Kamlesh Singh hailed from Jhunjhunu in Rajasthan. The 39-year-old Hav Kamlesh Singh belonged to 21 Rajput of the famed Rajput Regiment, known for its valiant soldiers and numerous battle honours. During 2017-18,  Hav Kamlesh Singh’s unit was deployed in Machil Sector in Kupwara district of J & K.

During Jan 2018, there was heavy snowfall in J & K resulting in very hostile weather conditions. The Snow and Avalanche Study Establishment(SASE) had warned of avalanches in higher reaches of the Kashmir valley after a 6.2 magnitude quake had struck Afghanistan on 31 Jan 2018. The SASE had warned of a medium-danger avalanche warning of level-3 in higher reaches of Baramulla district and low danger warning of level-2 in Kupwara, Bandipore, Shopian, and Kargil districts. On 02 Feb 2018, a horrific avalanche struck the army post of 21 Rajput at Sona Pandi Gali in Machil at around 4:30 pm. The avalanche was so sudden and severe that Hav Kamlesh Singh and three of his comrades got swept away and got trapped under tons of snow.

A massive rescue operation was launched by the Army and all the four trapped soldiers were evacuated and transferred to 92 Base hospital at Badamibag in Srinagar. However, Hav Kamlesh Singh could not be saved and succumbed to his injuries. Hav Kamlesh Singh was a valiant and committed soldier who laid down his life in the service of the nation.