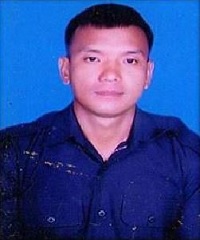 Hav Giris Gurung was born on 25 Feb 1979 and hailed from Nagidhar village in Kaski district of Nepal.  He joined the army on 27 July 1998 at the age of 19 years before completing his class X. He was recruited into 4/1 GR of 1 Gorkha Rifles Regiment, the Regiment known for its fearless soldiers and innumerable battle honours. After completing his training Hav Giris Gurung got posted to his parent unit and served at various operational locations.

Hav Gurung served with his unit in J &K as part of Op Rakshak from Feb 2000 to Mar 2002. Later he was deputed to serve with 15 Rashtriya Rifles battalion deployed in J & K for counter insurgency operations. In 2015 Hav Gurung was once again got posted to his parent unit which was deployed along the LOC in J &K. Thus Hav Gurung served in J &K for most part of his service career and developed into a battle hardened and committed soldier.

The militants were heavily armed and were trying to take advantage of thick jungle and rugged terrain. The exchange of fire continued for 36 hours in which Hav Gurung and his comrades managed to eliminate 4 militants. However during this operation, Hav Gurung along with 2 other soldiers, Hav Damar Bahadur and Rfn Rabin Sharma got seriously injured. They later succumbed to their injuries and were martyred. Hav Giris Gurung was a valiant and committed soldier who laid down his life in the line of his duty. Hav Gurung was given the nation’s second-highest peace time gallantry award, “Kirti Chakra” for his indomitable courage, bravery, devotion to duty and supreme sacrifice. He is survived by his wife Panch Maya Gurung and two children.

Hav Giris Gurung was the Search team commander on the Burji Spur GR-9031 in Kupwara District of Jammu & Kashmir. On 20 May 2017 at around 1405 hours he was leading the search while seeking contact in the steep slope with dense foliage and vegetation when a hidden terrorist fired at him and he was hit on his thigh. Though bleeding profusely, the Non-Commissioned Officer realizing the grave threat to his team and with utter disregard to his personal safety moved to a flank and assaulted the location thereby eliminating the terrorist with an accurate burst from his AK-47. Thereon, he identified the location of another terrorist who was firing towards his team. Though being grievously injured he lobbed a grenade in that direction and displayed supreme bravery charged at the hidden terrorist and fired at him thereby eliminating him at extremely close quarters though he later succumbed to his injuries. For this selfless display of conspicuous courage under fire and an unmatched aggressive spirit thereby making the supreme sacrifice Hav Giris Gurung is awarded, “Kirti Chakra”.