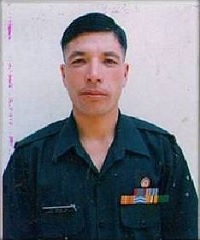 Hav Damar Bahadur Pun hailed from the village of Karaing Tun in Gulmi, Nepal. Hav Damar Bahadur joined the Army after completing his school education at the age of 19 years. He was recruited into 4/1 GR battalion of 1 Gorkha Rifles Regiment, an infantry regiment well known for its brave soldiers and numerous operations. By 2017, he had put in about 21 years of service and had been promoted to the rank of Hav.

During May 2017, Hav Damar Bahadur’s unit was deployed in Kupwara district of J&K. The unit was manning the forward posts along the LOC in Kupwara district and had to keep a strict vigil at all times as the area was also prone to infiltration from across the border. On 20th May 2017, there was another such attempt by the militants to infiltrate in the AOR(Area of Responsibility) of 1/4 GR. As the militants tried to infiltrate in Naugam sector of Handwara in Kupwara district, Hav Damar Bahadur and his soldiers detected the movement and intercepted them. A fierce gun-battle followed thereafter lasting several hours.

The militants were heavily armed and were trying to take advantage of thick jungle and rugged terrain. The exchange of fire continued for 36 hours in which Hav Damar Bahadur and his comrades managed to eliminate 4 militants. However during this operation, Hav Damar Bahadur along with 2 other soldiers Hav Giris Gurung and Rfn Rabin Sharma got seriously injured. They later succumbed to their injuries and were martyred. Hav Damar Bahadur was a valiant and committed soldier who laid down his life in the line of his duty. Hav Damar Bahadur was given the gallantry award, “Sena Medal” for his courage, devotion to duty and supreme sacrifice.

Hav Damar Bahadur Pun is survived by his wife Smt Kalpana Pun and two children.