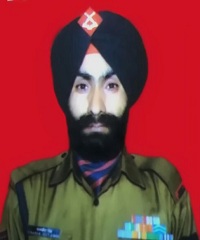 Havaldar Charanjeet Singh, hailed from Kalsian village of Nowshera in Rajouri district of J & K. During 2017-18, Hav Charanjeet Singh was serving with his unit deployed in J & K along the LOC.

On 17 April 2018, Pakistani troops initiated unprovoked firing on Indian posts from across the border in the Sunderbani sector in Rajouri district. Pakistani soldiers violated the ceasefire and resorted to unprovoked firing using small arms, automatics and mortars. Hav Charanjeet Singh’s unit was manning the forward posts in that sector. The Indian forces deployed at the posts retaliated forcefully and a fierce exchange of fire continued for several hours. During the exchange of fire Hav Charanjeet was grievously injured with bullets wounds. He was immediately shifted to the Military hospital at Jammu Army base and was given intensive medical care. However he later succumbed to his injuries and was martyred on 20 April 2018.

Hav Charanjeet Singh was a valiant and dedicated soldier who laid down his life in the service of the nation. He is survived by his wife, Neelam Kumari, and two daughters.