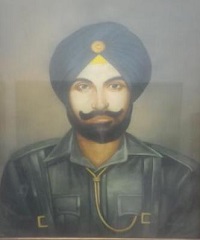 Hav Bachittar Singh was born on 10th January 1917 in Lopo village of Punjab and was the only child of Sardar Rur Singh. He had his education only up to 8th class, however he excelled in swimming and wrestling in his childhood.  Right from his young age Hav Bachittar Singh was a nationalist and always wanted to join the army to serve the nation.

At the age of 17 years Hav Bachittar Singh, joined the army and was enrolled in the Sikh Regiment on 10th January 1937. After completion of his basic military training he served with his battalion in various places like Africa and Greece. He participated in the second world war also and faced the enemies in South Africa. However it was after India’s independence in 1947, that Hav Bachittar Singh proved his mettle as a soldier par excellence.

After Independence on 15 Aug 1947, when Nizam of Hyderabad refused to join the Indian republic against the wishes of the people, India launched a police operation named “Operation Polo”, on 13 Sep 1948. 2 Sikh, the kill force of Sikh Regiment’s second battalion was given the most important task in Naldurg area. Havaldar Bachittar Singh was leading the platoon.

At around 4 am in the morning, the B company of the platoon set up blockades on the road. When two vehicles were seen approaching his position Hav Bachittar Singh ordered  his soldiers to fire on the approaching vehicles. There was a heavy exchange of fire but Hav Bachittar Singh in a show of bravery and leadership finally captured both the vehicles and their escorts.

On the same day enemy soldiers took secure positions and attacked his platoon. Hav Bachittar Singh with great skill and determination led the counter attack on the enemy forces. Hav Bachittar Singh was moving ahead in the face of the enemy and when he was about 30 yards away from the target, he got hit by a LMG burst in his thigh and fell. Despite in critical condition Hav Bachittar Singh, crawled forward and threw two grenades on the LMG post, and silenced it. Even though Hav Bachittar Singh  was severely injured, he refused to leave the battle field and kept on motivating his men to press on the attack.

Inspired by his courage and leadership his platoon finally achieved the objective , however Hav Bachittar Singh succumbed to his injuries and was martyred. Hav Bachittar Singh was given nation’s first highest gallantry award during peace time ,” Ashok Chakra” for his conspicuous bravery, indomitable spirit and supreme sacrifice.

The Citation of Ashok Chakra  awarded to Hav Bachittar Singh reads:

The same day fire was opened on the leading platoon from a strong point with a Bren Gun. Hav Bachittar Singh with great skill and determination led the attack on the position. When about 30 yards from the objective he got a LMG burst in his thigh and fell.In spite of his wounds,he crawled forward and threw two grenades on the LMG post,thus silencing it. Hav Bachittar Singh although mortally wounded refused to allow any one to dress his wounds and kept on encouraging his men to advance and capture the objective,which they did.

His personal example of unsurpassed valour, grim determination devotion to duty and leadership was an inspiration to all who saw it.