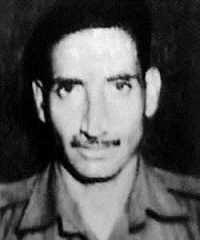 Hav Udham Singh was born on 16th March 1959 and hailed from Chaihadi village near Ghumarwin in Himachal Pradesh. After completing his schooling he joined the Army and was inducted into 18 Grenadiers of the Grenadiers Regiment, an infantry Regiment known for its valiant soldiers and various battle honours.

During June 1999, Hav Udham Singh’s unit was deployed in drass sector. Tololing feature was indicative of the deepest penetration made by Pakistan in Drass sector. By holding features of Hump, Point  5140, Point 4700 and area ‘Three Pimple’the enemy had ensured a secure route of maintenance for its troops at Tololing. 18 Grenadiers was tasked to capture Hump and also provide support to 18 Garhwal Rifles in its attack on Point 5140. Hav Udham Singh became part of the team that was tasked to capture Hump feature.

Hav Udham Singh’s movement was however noticed by the enemy who fired at him causing severe injuries to him. Without caring for his wounds, he rushed up to the enemy sangar and lobbed a hand grenade and fired at the soldiers inside. He succeeded in killing three enemy soldiers from close quarters and signaled his men to charge ahead. However during this process, he succumbed to his injuries and was martyred. His bold and courageous action eventually paved the way for the capture of the important tactical feature Hump, which later facilitated capture of another significant feature, Point 5140. Hav Udham Singh was a gallant and committed soldier who laid down his life in the service of the nation, following the highest traditions of the Indian Army.

Hav Udham Singh was given the gallantry award, “Vir Chakra” for his outstanding grit, determination, devotion to duty and supreme sacrifice.

On 13th/14th June 1999, Hav Udham Singh volunteered to lead the company attack with his section on area Hump in the Drass sector during “Operation Vijay”. He, with his section, kept on neutralizing enemy’s resistance en route. The section’s advance was impeded due to the heavy automatic fire of the enemy. Seeing this, Hav Udham Singh reacted immediately ordering his troops to keep engaging the enemy position, he with a small team crawled towards the enemy position from the flank. He halted his team close to enemy sangar and himself inched closer to lob a hand grenade inside. His movement was however noticed by the enemy who fired incessantly causing severe injuries to him. Without caring for his wounds, he rushed up to the enemy sangar and lobbed a hand grenade and fired from his personal weapon from close range lulling three occupants and called his men to charge ahead. In the process, he succumbed to his injuries but not before paving way for the capture of the important tactical feature Hump, which later facilitated capture of Point 5140. Hav Udham Singh displayed exceptional bravery and courage before making the supreme sacrifice for the nation in the highest traditions of the Indian Army.