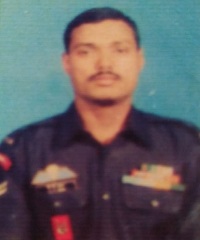 Hav Udar Bhanudas Parvati was born on 1st Jun 1972 hailed from Chambhurdi village of Shrigonda Tehsil in Ahmednagar district of Maharashtra. Son of Shri Parvati Narayan Udar and Smt Sarawati Parvati Udar, Hav Bhanudas joined the army on 9th May 1992 at the age of around 20 years. He was recruited into the Parachute Regiment, an elite regiment of Indian army well known for its daredevil operations. Later he joined 21 Para (SF), the special forces unit trained to undertake operations in very challenging conditions.

After serving for few years Hav Bhanudas got married to Ms. Chhaya on 26th May 1997 and the couple had two daughters Pratiksha & Aradhana and a son Prathmesh. By the year 2007, Hav Bhanudas had put in around 15 years of service and had the experience of working in various operational areas under very demanding conditions. By 2007 he had already taken part in many major operations including Op Rhino, Op Rakshak, Op Vijay (J&K) and Op Hifazat.

During 2007, Hav Udar Bhanudas’s unit was deployed in the North-East. During that period the area along the Indo-Myanmar border was active with terrorists indulging in anti-national activities. Based on the intelligence reports about the location of the terrorist camp in a village along the Indo-Myanmar border in Manipur, a decision was taken by the security forces to launch a raid on the camp. A team consisting of commandos from 21 Para (SF) was tasked to undertake that operation. Hav Udar Bhanudas was assigned the responsibility of the squad commander of the assault team. On 8th July 2007, as planned Hav Udar Bhanudas along with his team reached the suspected target area.

Immediately after reaching the suspected terrorist camp the troops came under heavy attack. The terrorists were heavily armed and were firing indiscriminately, on being taken aback by the surprise raid. Hav Udar Bhanudas and his comrades swung into action in no time and a fierce gun battle followed thereafter. Hav Udar Bhanudas with his soldiers while firing were also closing in to tighten the cordon around the terrorists. Hav Udar Bhanudas managed to eliminate one terrorist in an intense firefight. He then moved on to engage the second terrorist, but while doing so got hit by a bullet. He later succumbed to his injuries and was martyred. Hav Udar Bhanudas was a gallant and dedicated soldier who laid down his life in the service of the nation. He was given the gallantry award, “Shaurya Chakra” for his exceptional courage, devotion to duty and the supreme sacrifice.