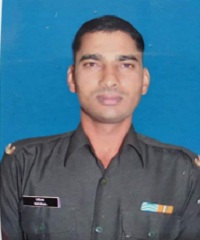 Havaldar Sheo Ram hailed from Tiba Basat village of Khetri Tehsil in Jhunjhunu of Rajasthan. Hav Sheo Ram joined the army in 2000 and served in various operational areas during his service career spread over 18 years. After serving for many years with his parent unit he was deputed to serve with 55 Rashtriya Rifles battalion, deployed in J&K for counter-insurgency operations. He got married to Ms Sunita Devi and the couple had a son.

During 2018-2019, Hav Sheo Ram’s unit 55 RR, was deployed in Pulwama district in J&K and was engaged in operations against the militants on a regular basis. Following the terrorists’ attack on the CRPF convoy in Pulwama on 14 Feb 2019, the security forces were maintaining a state of high alert, and subsequently, a massive operation was launched to nab the perpetrators of the attack. On 17 Feb 2019, the security forces received credible information from the intelligence sources about the presence of terrorists in Pinglan village of Pulwama district. Based on the intelligence inputs 55 RR along with the Special Operation Group of J & K Police launched a search and destroy operation in Pinglan a neighborhood of Kakpora the home of the terrorist, who had attacked the CRPF convoy on 14 Feb.

The assault team was being led by Brigadier Harbir Singh himself and Hav Sheo Ram was part of the team. On being challenged the terrorists opened fire and a fierce gun battle ensued thereafter lasting for over 20 hours. A number of hardcore terrorists responsible for the attack on the CRPF convoy on 14 Feb, were eliminated during the encounter. However, during the heavy exchange of fire, eleven security personnel too got injured including the leader of the team. The injured soldiers were shifted to the Army Hospital but Hav Sheo Ram and three other soldiers Maj Vibhuti, Sep Ajay Kumar, and  Sep Hari Singh succumbed to their injuries and were martyred. Hav Sheo Ram was a brave and committed soldier who laid down his life in the service of the nation, following the highest traditions of the Indian Army. Hav Sheo Ram was given the gallantry award, “Sena Medal” for his exceptional courage, devotion to duty and supreme sacrifice.

Hav Sheo Ram is survived by his mother Smt Sharli Devi, wife Smt Sunita Devi, son and brother Roopchand who is presently serving in  Army.