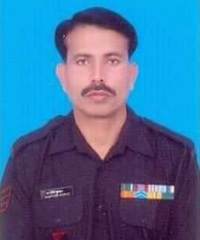 Hav Santosh Kumar hailed from Pura Bhadauria Village of Agra district in Uttar Pradesh. After completing his school education he joined the army in the year 1997 at the age of 17 years. He was recruited into 3 Raj Rif Bn of the Rajputana Rifles Regiment, one of the senior-most regiments of the Indian army. By 2019, Hav Santosh Kumar had put in about 22 years of service and had served in various operational areas often with the very challenging work environment.

After serving for few years, he got married to Ms. Vimala Devi and the couple had two daughters, Deeksha & Prathiksha and a son Abhay Pratap Singh. Later Hav Santosh Kumar was deputed to serve with 57 RR Bn deployed in the Kashmir valley for counter-insurgency operations.

During Nov 2019, Hav Santosh Kumar’s unit 57 RR Bn was deployed in the Akhnoor sector of J&K. As the AOR (Area of Responsibility) of the battalion was near the LOC, the troops were involved in counter-insurgency as well as counter-infiltration operations on a regular basis. The troops were also vulnerable to surprise attacks by the militants active in their area of responsibility.  On 17th Nov 2019, Hav Santosh Kumar was assigned an operational task along with few other soldiers and they had to move to a forward post in a military convoy.

As the convoy was on its way to the operational location and reached the Pallanwala area in the Akhnoor sector, it came under an IED (Improvised Explosive Device) blast. It was a preplanned attack by the militants in an attempt to cause maximum damage. The militants had deliberately chosen an area that was not effectively sanitized by the security forces. The impact of the blast was very severe injuring Hav Santosh Kumar and two other soldiers. They were evacuated to Army Command Hospital in Udhampur and were provided medical aid. However, Hav Santosh Kumar later succumbed to his injuries and was martyred. Hav Santosh Kumar was a brave and dedicated soldier who laid down his life in the line of his duty.