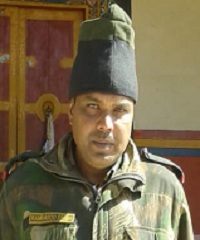 Hav Rambaboo Singh Chaudhary hailed from Ramnala village in Mathura district of Uttar Pradesh and was born on 1st January 1979. Son of Shri Dhanveer Singh and Smt Devi, Hav Rambaboo Singh Chaudhary completed his education from his village itself and joined the Army on 4th Jan 1997  at the age of 18 years. He was recruited into 24 Grenadiers of the Grenadiers Regiment, an infantry regiment well known for its gallant soldiers.

After serving for few years Hav Rambaboo Singh Chaudhary got married to Ms. Ramvati Devi and the couple had two sons Harish Kumar and Jivesh Kumar and a daughter Kalpana Kumari. By 2015, Hav Rambaboo had put in nearly 18 years of service and served in various operational areas in J&K and the North-East. While serving as Company Havaldar Major (CHM) he was also involved in the training of Bhutanese army personnel. While serving with his unit 24 Grenadiers, Hav Rambaboo  took part in operations in J&K during the Kargil war. Later in 2014, he was deputed to serve with 55 RR battalion deployed for counterinsurgency operations.

During 2015, Hav Rambaboo’s unit was deployed in Tawang area of Arunachal Pradesh in the North-Eastern region. The unit’s AOR ( Area Of Responsibility) fell in the region that was affected by Insurgency. The unit had to maintain a high state of alert at all times and the troops were engaged in operations against the militants on a frequent basis. Hav Rambaboo was part of such operations on a number of occasions.

On 14th March 2015, Hav Rambaboo was part of the team that was tasked for patrolling the insurgency prone Tawang area. The terrain of the route area was difficult and posed many challenges, coupled with hostile weather conditions. While carrying out the patrolling, Hav Rambaboo developed serious medical condition that necessitated his evacuation to the nearby medical facility.  Despite the medical care, Hav Rambaboo lost the battle of life and a dedicated soldier was lost in the line of his duty. Hav Rambaboo was a valiant and committed soldier who displayed remarkable courage and devotion to duty during various tasks assigned to him.