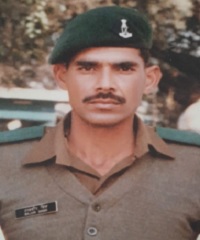 Hav Rajvir Singh Sheoran hailed from Maudi village in Bhiwani dist in Haryana. Like many of the youngsters of his village he too wanted to serve in the Armed Forces since his childhood. He continued to follow his dream and eventually joined the army after completing his schooling. He was enrolled into the 4 Jat of the famed Jat Regiment, a regiment known for its valiant soldiers and numerous battle honours.

There were reports about Pakistani infiltration in May 1999 and Hav Rajvir Singh’s unit was given the task to verify the legitimacy of these reports. On May 14, the 4th Jat Battalion launched a patrol to check the strategically important Bajrang post with Lt Saurabh Kalia leading the five-man patrol. Heavy snowing in the area prevented them from reaching Bajrang post on that day, and they resumed their patrol the day after. But as they neared their objective around 3.30 pm on May 15, they were suddenly fired upon by the intruders who had occupied the Bajrang Post. They reported the incident back to battalion headquarters, seeking urgent reinforcements. Lt Kalia and his team fought back but soon ran out of ammunition. They were surrounded and captured before the reinforcements arrived.