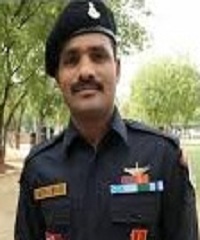 Hav Praveen kumar hailed from Reddivaripalle village of Chittoor district in Andhra Pradesh. Son of Shri Chikala Prathap Reddy and Smt Sugunamma, he joined the Army in the year 2002 at the age of 19 years. He got recruited into 18 Madras of the Madras Regiment, an infantry Regiment well known for its dauntless soldiers and numerous battle exploits. After serving with his parent unit for some time, he also got trained as a commando and worked with the elite NSG for three years.

He got married to Ms Rajitha in the year 2010 and the couple had a son and a daughter. By the year 2020, he had put in around 18 years of service and had been promoted to the rank of Havaldar. By then he had served in various operational areas and gained substantial experience of working in challenging conditions. Besides being a tough soldier he was a very good human being and a source of inspiration for the younger generation of his his village.

During Nov 2020, Hav Praveen kumar ‘s unit 18 Madras was deployed in Kupwara district of J&K close to the Line of Control(LOC). The unit troops were engaged in counter-insurgency operations on a regular basis as its AOR (Area of Operation) was affected by active militancy. The LOC remained highly active and volatile with ceasefire violations occurring very often and without any warning. Besides manning the forward posts in Machil sector in Kupwara district,  Hav Praveen kumar’s unit also undertook operations to check the infiltration bids as its AOR was prone to infiltration by the militants from across the border. On 08 Nov 2020, one such infiltration bid was reported by the BSF patrol at around 0100 hrs near the anti-infiltration obstacle system about 3.5 Kms from the LOC.