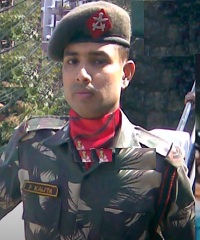 Hav Pranay Kalita hailed from Ghatbar Saderi village in Barpeta district of Assam. He was inclined to join the Army since his younger days and kept working towards it. Eventually he was recruited into 4 Assam Rif battalion of Assam Rifles, the oldest para-military force of India with its headquarters at Shillong. It was engaged in defending the Indo-Myanmar border as well as conducting counter-insurgency operations in the North East states.

During 2020, Hav Pranay Kalita’s unit 4 Assam Rif was deployed in Chandel district along the Indo-Myanmar border. As the AOR(Area of Responsibility) of the unit was affected by militancy, the unit troops were engaged in operations against the militants on a frequent basis. The unit launched regular patrols to monitor suspicious activities as part of their operations to keep militancy under check. On July 29, 4 Assam Rif launched an area domination patrol in Khongtal in Chandel district near Indo-Myanmar border area. The Khongtal village fell under the jurisdiction of Chakpikarong in Chandel district about 100 kms from Imphal in Manipur. When the patrol team comprising 15 soldiers including Hav Pranay Kalita was returning after the operation, the suspected militants blasted IED bombs, which was followed by firing by the militants.

The Manipur Naga People’s Front (MNPF), the Revolutionary People’s Front (RPF) and the United Liberation Front of Asom – Independent (ULFA-I) claimed responsibility for the attack. These suspected organisations were engaged in the anti national activities and often attacked security forces. The IED blast was devastating and did not give time for the soldiers to react. Hav Pranay Kalita, Rifleman Methna Konyak and Rifleman Ratan Salam got seriously injured and succumbed to their injuries. The other injured soldiers were shifted to the Army hospital for medical treatment. Hav Pranay Kalita was a valiant and dedicated soldier, who laid down his life in the line of his duty.

Hav Pranay Kalita is survived by his parents, wife and two daughters.