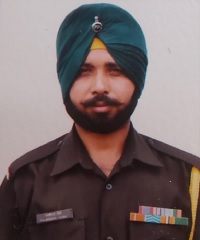 Hav Palwinder Singh was a resident of  Rai Chak village in Batala tehsil of Gurdaspur district in Punjab. He was born on 17th of Sep 1980 to Shri Santokh Singh, who served in Border Security Force (BSF) long back. Palwinder Singh  joined the Army at the age of twenty, in the year 2000.  He was recruited into 10 Sikh of the famed Sikh Regiment known for its valiant soldiers and various battle honours.

During 2017, Hav Palwinder Singh’s unit was deployed along the LOC in Qazigund area of Kulgam. The LOC in that sector is very volatile and active where the enemy often resorts to unprovoked firing. It is monitored and guarded by the security forces by employing armed patrols on a continuous basis. On 04th December 2017, an  army convoy had set off from Udhampur to undertake operations in Srinagar. While army convoy were crossing the Khanabal area, on the way, they were ambushed by militants who were hiding in safe places behind the bushes. It was attacked by militants in a pre-planned move. They attacked the convoy with heavy automatic weapon firing from vantage points and fired rockets and grenades. Most of the convoy, consisting of about 4 vehicles with 50 soldiers, was severely damaged. In the ensuing gun battle, Hav Palwinder Singh was hit by the bullet which passed by his right eye and and came out through his ear. The critically injured Palwinder Singh started bleeding severely. He was immediately shifted to the nearest hospital where  the brave soldier succumbed to his injuries.

His mortal remains were brought to his hometown where he was cremated with full military honours. Hundreds of civilians and army personnel paid their tributes. Hav Palwinder Singh was a valiant and dedicated soldier, who at the young age of 37 years, laid down his life in the service of the nation. The supreme sacrifice of Hav Palwinder Singh will always be remembered.

Hav Palwinder Singh is survived by his wife Palwinder Kaur, daughter Simrandeep Kaur and  son Sehajdeep.