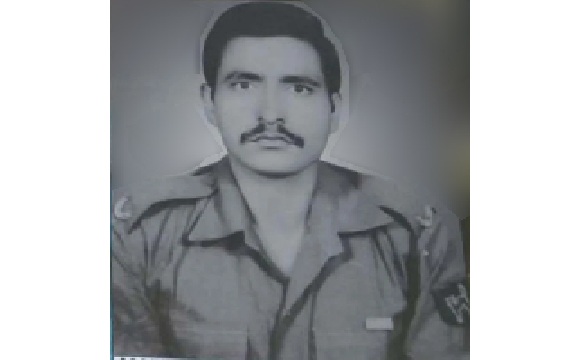 Place of birth : Baghpat, (UP)

Hav Padam Singh Dhama hailed from Binauli village in Baraut Tehsil of Baghpat district in Uttar Pradesh and was born on 3rd Jun 1962. He joined the Army after completing his school education in the year 1980 at the age of 18 years. He was recruited into 16 Grenadiers of the Grenadiers Regiment, an infantry Regiment known for its brave soldiers with a rich history of various battle honours.

After serving for few years he got married to Ms Mukesh Devi. By the year 1999, he had put in over 19 years of service and had been promoted to the rank of Havaldar. By that time he had served in various challenging operational areas and developed into a battle hardened soldier.

During 1999, Hav Padam Singh Dhama's unit 16 Grenadiers was deployed in Dras sector in Kargil. The unit troops were manning the forward posts in the sector along the LOC.  The LOC remained highly active and volatile with ceasefire violations occurring very often and without any warning. 16 Grenadiers was posted in Dras for the past two years, occupying two company posts at two extreme ends of the battalion area of responsibility. There was an unoccupied area extending for 20 km between the two companies. Towards the East was another vacant area of 10 km while to the West, an area of 50 km remained unoccupied. The balance two companies were kept at Dras for quick reaction to any eventuality and anti-terrorist duties during the summer months. The unit troops were also engaged in counter-infiltration operations on a regular basis as the area was prone to infiltration from across the border. In the early part of May 1999, unusual movements were noticed in Batalik-Yaldor sector and consequently Indian Army units had commenced aggressive patrolling of the area in their AOR (Area of Responsibility). Similarly on 08 May 1999, Hav Padam Singh was part of one such patrol in Dras sector.

Hav Padam Singh's patrol was tasked to check for the presence of intruders and also see if the snow had retreated enough for the summer positions to be re-occupied. However while the patrol was underway they were attacked by the enemy soldiers who had infiltrated into the area. Hav Padam Singh and his comrades took positions to counter attack and a gun battle ensued thereafter. However during the exchange of fire, Hav Padam Singh received gun shots in his chest and got seriously injured. He subsequently succumbed to his injuries and was martyred. Hav Padam Singh Dhama was a valiant and committed soldier who laid down his life in the service of the nation.

Hav Padam Singh Dhama is survived by his wife Smt Mukesh Devi.