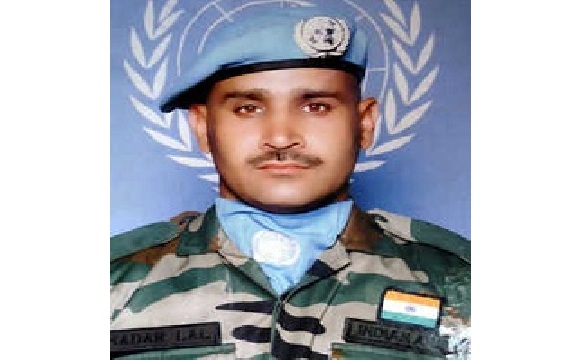 Havildar Madan Lal Sharma hailed from Gharota village of Pathankot District in Punjab and was born on 04 Feb 1979. Son of Shri Dharam Chand and Smt Dharmo Devi, Hav Madan Lal was the youngest of three brothers and two sisters. He completed his Matric from AVSC secondary School Batala in Punjab. Right from his younger days, he always wanted to serve in the Army like many young men in Punjab. Following his dream, he joined the army after completing his school education in the August 1999 at the age of 20 years. He was recruited into 05 Dogra battalion of the Dogra Regiment, an infantry Regiment known for its brave soldiers and numerous battle honours.

After completing his training, he served in various operational areas and developed into a dedicated soldier.  After serving for sometime, he got married to Ms Bhawna and the couple was blessed with a daughter Shweta and son Kannav. By 2016, he had put in nearly 17 years of service and gained the reputation of a fine and committed soldier. In July 2016, he was deputed to serve with 20 Dogra battalion and was posted to J&K.

During 2016, Hav Madan Lal's unit 20 Dogra was deployed in Kupwara district of J&K along the LOC. The unit troops were engaged in operations against the terrorists on a regular basis as the unit's area of responsibility (AOR) was active with militancy. The area was also prone to infiltration, which necessitated regular armed patrols to check any infiltration from across the border. The AOR of the unit also spanned over dense jungle and remote rugged mountainous terrain with extreme weather conditions, especially in the winter season. On 20th Sep 2016, Hav Madan Lal's unit received credible information from the intelligence sources about the possible infiltration attempt by the terrorists in Nowgam sector of Kupwara district. Based on the intelligence inputs the unit decided to launch a search and destroy operation in the suspected area on 20 Sep 2016. Hav Madan Lal was made part of the team that was assigned the task of this operation.

On 20 Sep 2016 as planned Hav Madan Lal  and his comrades reached the suspected area and launched the search and cordon operation. As the operation was underway, the militants felt cornered and started firing at the troops. The militants were heavily armed and were firing at the troops from vantage points. But Hav Madan Lal and his comrades continued to give a befitting reply to the firing by militants. However, during this exchange of fire Hav Madan Lal got hit by a bullet and was critically wounded. He was immediately evacuated to the nearby medical facility for medical treatment. However, Hav Madan Lal soon succumbed to his injuries and was martyred.  Hav Madan Lal was a brave and dedicated soldier who made the supreme sacrifice in the service of the nation at the age of 37 years. He was given the gallantry award, “Sena Medal” (posthumous) for his exceptional courage, devotion to duty, and supreme sacrifice.