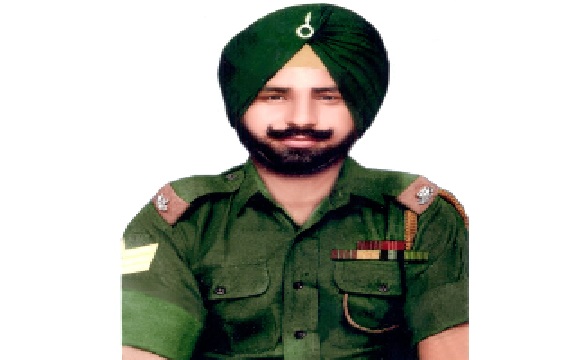 Hav Kashmir Singh hailed from Nikko Sarai village, located in Dera Baba Nanak tehsil of Gurdaspur district in Punjab and was born on 20 Feb 1952. Son of Shri Kartar Singh and Smt Kartar Kaur, he was inclined to serve in the Army like many young men in Punjab. He completed his class X from the Government Senior Secondary School Teja Kalan and joined the Army thereafter on 20 Feb 1970 at the age of 18 years. He was recruited into 13 Sikh LI of the Sikh Light Infantry Regiment, an infantry Regiment known for its brave soldiers and rich history of various battle honours.

After completing his training he soon got involved in active operations as his unit got deployed on the border during the 1971 war with Pakistan.  After serving for few years he got married to Ms Surinder Kaur and the couple had a son Roop Tejinder and a daughter Sukhwinder Kaur. By the year 1987, he had put in around 17 years of service and had been promoted to the rank of a Havildar.

During Oct 1987, Hav Kashmir Singh's unit 13 Sikh LI got deployed in Sri Lanka as part of IPKF operations.  The IPKF launched its first operation on 9 October 1987, after formulating a multi-pronged strategy to take on LTTE. Code-named Operation Op Pawan, it was expected to neutralize LTTE operational capability in and around Jaffna. This included the capture or neutralization of the LTTE’s chain of command, which was expected to leave the rebel movement directionless in the face of the impending assault on the LTTE strongholds by the IPKF.  On 10 October 1987, Intelligence inputs suggested that the LTTE leadership, which included not only Prabhakaran but also his deputies like Mahatiya and local military commanders were going to attend a meeting at their tactical HQ at Kokkovil in the Jaffna University campus on the night of October 11th.

The Army decided to utilize this opportunity of capturing them all and cut short the bitter fighting that lay ahead for the capture of Jaffna.  A Special Helicopter Borne Operation (SHBO) was planned in which troops would be dropped in Jaffna University. The troops, would try to capture the LTTE Top leaders in a lightning strike and bring to end the resistance of the LTTE. The SHBO was planned to be carried out on the night of Oct 11/12, when the Helicopter force would have to heli-drop IPKF Troops in the football ground in the Jaffna University Campus. The Troops allocated for the mission were 120 Commandos from 10 th Para Commando and about 360 Troops from 13th Sikh LI. At that time 13th Sikh LI was still under induction, with troops arriving into Jaffna airport by flights.

Soon after the 13 Sikh LI battalion touched down at the Palai airfield on 11 October 1987, it was tasked to undertake a heliborne operation the same night, drop behind enemy lines and secure the enemy headquarters around Kokkovil. The Battalion, minus two companies, which had landed, was to fly out in 14 sorties commencing 2300 hours. Delta Company, under Major Birendra Singh, was to move in the first wave, take over the helipad from a team of 10 Para Commandos and secure it for the subsequent landing of the battalion. Major Birendra Singh meticulously organized his company into helicopter loads and briefed them about a mission they had never before undertaken. The landing zone came under very heavy intense and accurate fire, thus preventing the landing of the complete 10 Para Commando team. Major Birendra Singh with one platoon landed amidst a volley of fire and in conjunction with the depleted 10 Para Commando team secured the helipad. Hav Kashmir Singh was part of the platoon along with Major Birendra Singh.
The heliborne operations were called off because all available helicopters had been mauled by enemy fire. Thus Major Birendra Singh, with barely a platoon, lay behind the strongest enemy foothold. He was totally undeterred when told that subsequent sorties were not feasible and link-up would be by the land route. The 10 Para Commando team was asked to move up further which left Major Birendra Singh and his depleted platoon completely surrounded by the enemy. The anticipated link-up could not materialize. Major Birendra Singh, with limited ammunition and manpower, continued to hold out against unimaginable odds and inflicted tremendous casualties on the enemy as per the last radio communication. Hav Kashmir Singh and his 29 other comrades continued to fight till they laid down their lives. Only one soldier Sep Gora Singh survived, who was captured alive by the LTTE.  Besides Hav Kashmir Singh, the other 28 fallen soldiers included Major Birendra Singh, Subedar Sampuran Singh, Hav Ajit Singh, Hav Swaran Singh, L/Hav Sher Singh SM, Nk Surjit Singh, Nk Gurmail Singh, Nk Mukhtiar Singh, Nk Satwinder Singh, L/Nk Hira Singh, L/Nk Manjit Singh, L/Nk Darshan Singh SM, Sep Lal Singh, Sep Ranjit Singh, Sep Kuldip Singh VrC, Sep Jarnail Singh, Sep Sohan Singh, Sep Gurdial Singh, Sep Gurbax Singh, Sep Gurnam, Sep Satnam Singh, Sep Joginder Singh, Sep Sakinder Singh, Sep Bakshish Singh, Sep Somnath Singh, Sep Harjinder Singh, Sep Sukhwant Singh VrC and Sep Sukhwinder Singh.
Hav Kashmir Singh displayed commendable courage and devotion to duty in very challenging circumstances and made the supreme sacrifice.  He was awarded the "Sena Medal", posthumously on 26 Jan 1988 for his exceptional courage, determination and supreme sacrifice. Hav Kashmir Singh is survived by his wife Smt Surinder Kaur, son Shri Roop Tejinder Singh and daughter Smt Sukhwinder Kaur.

A memorial has been constructed in the honour of Hav Kashmir Singh at his native place in Nikko Sarai village, located in Dera Baba Nanak tehsil of Gurdaspur district in Punjab.