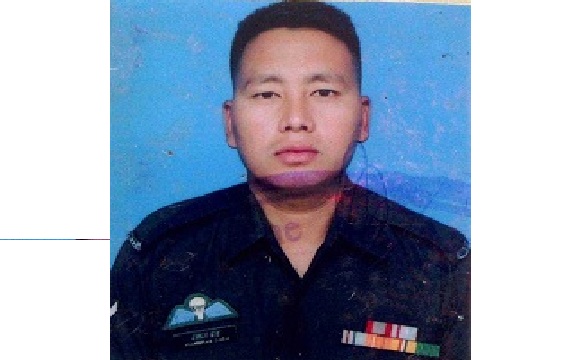 Hav Hangpan Dada, fondly called by his comrades as Dada, was born on  2nd October of 1979 in Borduria village in Tirap district of Arunachal Pradesh.  Hav Dada was a keen sportsman and used to run several kilometers and do 25-30 push-ups every day even as a child.  Hav Dada joined the Army and was recruited to the 3rd Battalion of the Parachute Regiment on 28 October 1997. Six years later, he then went on to serve with the Assam Regimental Center and joined the 4th Battalion of the Assam Regiment on 24 Jan 2008.

A few years later in 2016, Hav Dada then volunteered to serve with the 35 Rashtriya Rifles engaged in anti-insurgency operations in J & K. A devout Christian, Hav Dada also conducted heavily subscribed Sunday sermons for the men in the unit. He did the same while on leave in his hometown in Arunachal Pradesh. He was fond of keeping snakes as pets and had to be evacuated by a helicopter once after he was bitten by one of them. Hav Dada was a soldier par excellence and was equally liked by his peers as well as seniors.

During May 2016, Hav Dada’s unit, 35 RR was deployed in the Naugam sector of Kupwara district of J&K. The unit troops were manning the forward posts on Shamshabari range and were engaged in operations against the terrorists on a regular basis as the unit's area of responsibility (AOR) was active with militancy. The area was also prone to infiltration, which necessitated regular armed patrols to check any infiltration from across the border. The AOR of the unit spanned over remote rugged mountainous terrain with extreme weather conditions, especially in the winter season.  On 26 May 2016, one of the soldiers at 'Meera' post of the unit observed suspicious movement and alerted his Company Commander Major K Amritha Raj. Immediately four posts on the ridgeline along with three posts sticking out from the snow swept slopes below were put on high alert.  Hav Hangpan Dada was manning the 'Sabu' post along with few other soldiers, about 2000 meters below the ridge line. Hav Dada without any delay swung into action and deployed his troops to hem the terrorists in.

As the posts on the ridge line opened up firing on spotting the terrorists, they swiftly moved down towards the 'Sabu' post where Hav Dada along with his comrades lay to ambush them. But the terrorists spotted the positions of Hav Dada and his men and attacked them with bursts of fire from their automatic weapons. Hav Dada realizing the gravity of the situation, in a daring move leapt from his position and charged up the slope towards the intruders. In a swift move Hav Dada then fired and eliminated two terrorists. He soon spotted two more terrorists sprinting in different directions to take cover behind the large boulders. Hav Dada trudging through the snow dashed towards the third terrorist. His buddy Lance Hav Vareshang was trailing just behind him to give him cover if needed. In the meantime the third terrorist sprang from the boulder and released a burst of fire at Hav Dada. However Hav Dada in a lightning speed flung himself sideways and managed to dodge the burst of bullets. He then crept towards the boulder and lunged at the hiding terrorist.

In a hand to hand fight that followed, Hav Dada smashed the terrorist with his rifle butt and then snapped his neck. He then turned his attention towards the fourth terrorist, but by then he was standing exposed. At this juncture, the fourth terrorist hiding behind a boulder shot at Hav Dada and the bullet ripped through his neck. Despite his grievous wounds, Hav Dada pinned down the shooter and severely injured him.  However Hav Dada soon succumbed to his injuries and was martyred.  Hav Dada killed three terrorists in the operation single-handedly and his action led to the elimination of the fourth terrorist as well. Hav Dada’s action of eliminating three terrorists in an engagement at close quarters and injuring a fourth one, in disregard to his personal safety, foiled the infiltration bid and ensured the safety of his comrades.  Hav Dada displayed exemplary courage and determination during the operation and laid down his life for in the line of his duty.

Hav Hangpan Dada was given the nation’s highest gallantry award during peacetime operations, “Ashok Chakra”, on the eve of Independence Day in 2016. Hav Hangpan Dada is survived by his wife Smt Chasen Lowang Dada, daughter Roukhin, and son Senwang.

Citation for Ashok Chakra awarded to him reads-

On the night of 26 May 2016, Dada, as Sabu Post Commander of 35 Rashtriya Rifles, while establishing a stop along with his Section at 12,500 feet, led a charge on hiding terrorists in Naugam, Jammu and Kashmir resulting in the neutralization of four heavily armed terrorists. He along with his team spotted the movement of terrorists in the area and engaged them in a fierce encounter that went on for over 24 hours. He charged at the spot where terrorists were and killed two terrorists on the spot and later the third one after a hand-to-hand scuffle as they slid down the hill towards the Line of Control. Dada sustained a sudden burst of automatic fire from the hiding fourth terrorist, receiving a gunshot wound. He continued to pin down the fourth terrorist and later succumbed to his injuries before wounding the terrorist.

Dada’s action of eliminating three terrorists in an engagement at close quarters and injuring a fourth one, in disregard to his personal safety, foiled the infiltration bid and ensured the safety of his men. He was honoured posthumously, the highest gallantry award during peace-time operations, Ashok Chakra, on the eve of the Independence Day in 2016.