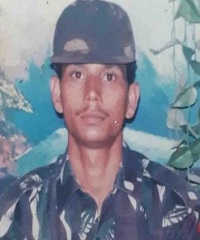 Place of Birth : Kanpur dist (UP)

Hav Dharmendra Singh hailed from Birahinpur village in Ghatampur Patara tehsil of Kanpur district in Uttar Pradesh. Son of Late Ratan Singh and mother Smt. Shivdevi Singh, Hav Dharmendra Singh always wanted to wear army uniforms like his father who too served in the army. After completing his class X from his village, he joined the army in the year 1999 at the age of 17 yrs. He was recruited into  27 Rajput Battalion of the Rajput Regiment, an infantry regiment with a long history of bravery in various wars & operations. The 27th Rajput Battalion was raised at Fatehgarh in Uttar Pradesh in the year-1988. With its motto “Sarvada Sarv Shersht” meaning “Victory Everywhere”  27th Rajput took part in operations during the Kargil war in 1999 and successfully captured Point 5770.

After serving for a couple of years, Hav Dharmendra got married to Ms. Sunita Devi in 2002 and they had two sons, Utkarsh and Rajvardhan. By Jan 2020, Hav Dharmendra had put in over 20 yrs of service in the army and had the experience of working in various challenging operational locations. He got promoted to the rank of Havaldar in 2017 and also served as part of the UN peacekeeping force in Lebanon in the Middle-East. Later in 2018, he got posted to the J&K area where his unit was deployed along the LOC.

During 2020, Hav Dharmendra’s unit 27 Rajput bn was deployed in Drass Sector in Kargil district of Ladakh. The unit troops were manning the forward posts in the Drass sector along the LOC. Besides manning the posts, the unit soldiers had to undertake armed patrols regularly to monitor the area under its AOR ( Area of Responsibility). The posts were located in high altitude areas with inhospitable weather conditions and rugged terrain. Many posts, as well as the patrol routes of the unit, were prone to snow blizzards and unpredictable avalanches during winter seasons. One such avalanche struck the patrol party of the unit on 16th Jan 2020. Hav Dharmendra was part of this patrol along with a few of his comrades.

There was heavy snowfall in Kargil and other parts of Kashmir in the 2nd week of Jan 2020 triggering a number of avalanches in the region. One such avalanche engulfed the patrol party of 27 Rajput Battalion in the Drass Sector on 16th Jan 2020. The magnitude and suddenness of the avalanche did not give any chance to the soldiers to take any evasive action. Hav Dharmendra and his comrades went missing and got buried under a huge amount of snow. Army launched a massive rescue operation with specialized equipment despite very hostile weather conditions. The rescue team eventually managed to extricate the buried soldiers who were immediately shifted to provide medical treatment. However, Hav Dharmendra Singh’s medical condition deteriorated owing to very prolonged exposure to extreme cold conditions. He eventually lost the battle for life and was martyred. Hav Dharmendra Singh was a valiant and dedicated soldier who laid down his life in the line of his duty.