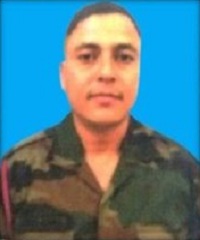 Hav Deepak Karki hailed from Bhutwal in Rupendehi Pradesh in the Gulmi district of Nepal. Born in the year 1983, he joined the Army after completing his school education at the age of 20 years. He was recruited into 3/5 GR battalion of 5 Gorkha Rifles Regiment, an infantry Regiment known for its brave soldiers and glorious history of various battle honours. By the year 2020, he had been promoted to the rank of Havaldar and had developed into a dedicated and battle-hardened soldier. He had served in various operational areas by then and gathered substantial field experience.

During June 2020, Hav Deepak Karki’s unit was deployed in the Rajouri district of J&K. The unit troops were manning the forward posts in the Nowshera sector along the LOC. The LOC remained highly active and volatile with ceasefire violations occurring very often and without any warning. Like previous years, the year 2020 too continued with ceasefire violations. Pakistan continued to violate the 2003 ceasefire agreement with India despite repeated calls for restraint and adherence to the pact during flag meetings between the two sides. In yet another case of ceasefire violation, Pakistani troops opened unprovoked fire in the Nowshera sector along the LOC on 22 June 2020.

On 22 June 2020, in the early morning Pakistan Army troops initiated unprovoked firing on Indian posts from across the border in the Nowshera Sector of Rajouri district. During that period, Hav Deepak Karki was manning one of the forward posts in the Kalal area along the Line of Control in the Nowshera sector. The Pakistani troops violated the ceasefire and resorted to heavy cross-border firing using mortars as well as field guns. Indian army responded in a befitting manner to the Pakistani aggression and consequently, a heavy exchange of fire ensued thereafter, which continued intermittently for several hours. However, during this heavy exchange of fire, Hav Deepak Karki got severely injured. He later succumbed to his injuries and was martyred. Hav Deepak Karki was a valiant and committed soldier, who laid down his life in the line of his duty. Hav Deepak Karki was given the gallantry award, “Sena Medal” on 26 Jan 2021 for his exceptional courage, devotion to duty, and supreme sacrifice.

Hav Deepak Karki is survived by his wife, two daughters and a son.