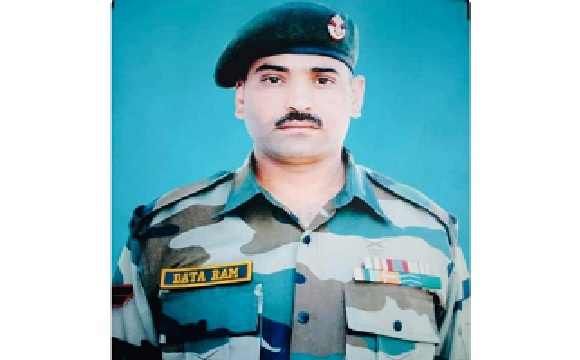 Havaldar Data Ram Jat hailed from Piraka village in Bharatpur district of Rajasthan and was born in the year 1976. Hav Data Ram had two brothers as siblings wherein elder brother Mordhwaj too served in the Army and retired as a Subedar. After completing his school education, he joined the army in the year 1997 at the age of 21 years. He was recruited into 3 Raj Rif battalion of the Rajputana Rifles Regiment, an infantry Regiment known for its brave soldiers and numerous battle honours

After serving for few years, he got married to Ms Pinki Devi and the couple had two daughters Jyoti & Simran and a son Shiva. By the year 2021, he had put in around 24 years of service and had been promoted to the rank of Havaldar. By that time he had served in various challenging operational areas and developed into a dedicated soldier. He also had a stint abroad as part of Indian Contingent in a UN Mission. Hav Data Ram had multiple tenures in J&K area and served for nearly 17 years in the trouble torn area of Kashmir.

During Nov 2020, Hav Data Ram‘s unit 3 Raj Rif was deployed in Kupwara district of J&K close to the Line of Control(LOC). The unit troops were engaged in counter-insurgency operations on a regular basis as its AOR (Area of Operation) was affected by active militancy. The LOC remained highly active and volatile with ceasefire violations occurring very often and without any warning. Besides manning the forward posts in Kupwara district,  Hav Data Ram‘s unit also undertook operations to check the infiltration bids as its AOR was prone to infiltration by the militants from across the border.

Besides facing stressful situations Hav Data Ram and other soldiers also faced inhospitable terrain under extreme weather conditions. Thus the work conditions demanded a very high level of physical as well as mental fitness. Hav Data Ram was accustomed to such stressful work environment as he had substantial experience of working in J&K area. However on 19 Feb 2021, Hav Data Ram while on an operational assignment, faced acute breathing problem. He was rushed to the nearby medical facility for treatment, but he eventually lost the battle for life. Hav Data Ram was a dedicated and valiant soldier who laid down his life in the line of his duty.