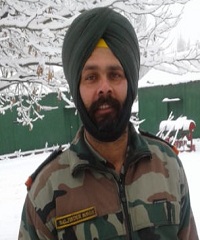 Havildar Baljinder Singh hailed from Zahura village in Tanda tehsil of Hoshiarpur district in Punjab. Son of Late Shri Gurbachan Singh and Smt. Kunti Devi, Hav Baljinder Singh  wanted to join the armed forces since his younger days. He continued to pursue his dream and eventually got selected to join the army after completing his class XII in the year 1999. He was recruited into 2 Sikh LI of the Sikh Light Infantry Regiment, a regiment with a rich history of gallantry in various wars & operations.

After serving for few years, Hav Baljinder got married to Ms. Perdeep Kaur in 2007 and the couple had two sons Manavpreet and Vihaanpreet. By 2020, Hav Baljinder had put in about 20 years of service and had developed into a tough and professionally competent soldier. He was promoted to the rank of Havildar in 2017 and later in 2019 got posted to Siachen Glacier.

During 2020, Hav Baljinder was serving with his unit that was deployed at the Siachen area. The unit was deployed at the Saltoro ridge along the AGPL (Actual Ground Position Line) South-West of the Siachen Glacier. Siachen is the second longest glacier in the world and is known as the world’s highest battleground, situated at an altitude of 5,700 meters. The extremely low temperatures – which can drop to minus 60 degrees Celsius during winter – has claimed hundreds of lives since 1984, when India and Pakistan stationed their troops on the Glacier. The soldiers at the Saltoro ridge located about 20 km South-West of Siachen have to fight not only the treacherous enemy but the extreme hostile weather too on a daily basis.

On 17th Jan 2020, Hav Baljinder was on a patrol duty traversing through harsh icy terrain when he was hit by a snow blizzard. Hav Baljinder was air-lifted to the nearby military hospital in Leh for medical treatment. However, due to prolonged exposure to very extreme cold temperature conditions, Hav Baljinder developed hypothermia. Despite battling valiantly, he lost his life and was martyred. Hav Baljinder was a gallant and dedicated soldier who laid down his life in the line of his duty.